FOOD PRICES SURGE AGAIN: Is the Inflation Genie Out of the Bottle?

While government statisticians claim robust growth, recent data points suggest otherwise. Consumers are quickly running out of money, home sales have collapsed and hit their biggest drop in three years, there are more Americans out of the labor force than ever before, and one third of adults under the age of 35 are living with their parents because they can no longer afford to pay their own mortgage.

By all accounts, the reality is that we are now factually in a recession, a point further emphasized by the recent revelation that American companies are experiencing near zero percent earnings growth. 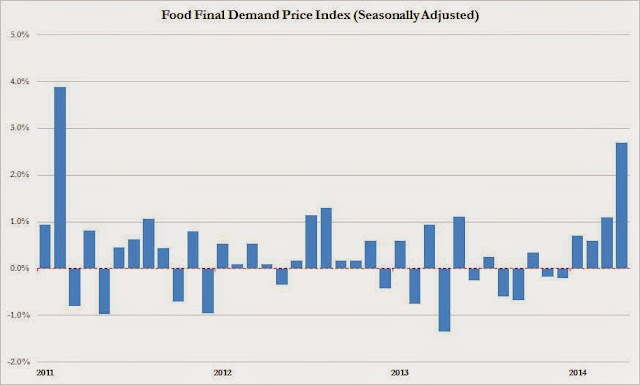 But that’s just the beginning. As we warned earlier this year, food prices would see a steady rise through 2014 because of increased global demand, drought and continued degradation of the U.S. dollar.

The Producer Price Index made available by the Bureau of Labor and Statistics this morning has now confirmed those fears. Consumers are seeing an immediate impact to their wallets in the form of food price inflation and in all likelihood the trend will continue going forward.

These latest numbers are serious. So much so that according to Zero Hedge, “the last time food prices spiked by this much in one month, the resulting Arab Spring wave of revolutions tumbled governments across north Africa and the Middle East.”

The trend over the last several months shows a clear and sustained rise in prices for food, something that nearly 50 millions are already struggling to acquire, even with assistance from the government. Now their food stamps buy even less. And if people are spending more on food, it means they’ll be spending less in other sectors of the economy.

Karl Denninger at The Market Ticker warns that this is bad news because consumers are now paying 7.4% more for food on an annual basis than they were last year, a scenario which could lead to macro-economic repercussions by Fall.

Food was up huge, and people will dismiss the headline 0.6% (monthly, which would be a 7.4% annual inflation rate!) on food, which of course doesn’t “hit” core.

The next claim that will be made is that this is “transitory.” Unfortunately the intermediate (~1-3 months forward) and crude (~3-6 month forward) numbers tell a very different story.

The intermdiate trend in foods is bad news; that is a monthly change. Energy has been the counterbalance the last two months on an intermediate term, and has kept things in check, and “less foods and energy” has been reasonably-behaved — right up until this year. Now it’s looking less-so. But the alarm bells are not there, they’re in the forward trend on the crude side.

Here’s the problem — we’re several percent ahead of last year’s rate at this time of the year. Spring into early summer tends to have a PPI increase in crude goods. But if that spread continues we’re going to have a major problem coming into the fall as this works through the system, and given unit labor costs and productivity numbers (both going the wrong way too) there is no ability to absorb it.

Now let me point out that we’re not quite where you have to ring the “oh crap” bell yet. There’s another month or two before that happens — but by June, if the trend we’re seeing here hasn’t broken this will get into the forward economic analysis mindspace of most of the people who look at this stuff.

There is no ability in the economy to absorb such price increases as productivity and unit labor cost figures have shown. Instead, what this will produce is recession – deep recession.

We never recovered. The Fed, and foreign governments, primed the pump with funny money but there was never any economic water under there to pull up.

They can tinker the numbers all they like, they can rename and manufacture stats and what they mean, they can print all the money they wish. That even that is failing... just goes to show. It is only a surprise if you chose to not see.