You know that totally insane Benghazi conspiracy theory? Yep. It keeps getting less insane each and every day

Was the Benghazi debacle, as "The Citizen's Committee on Benghazi" asserts, really a failed kidnapping attempt? Was it part of a broader plot to trade a U.S. Ambassador for the release of the “Blind Sheikh”, Omar Abdul Rahman?

It sounds insane, yet each and every day more evidence emerges to support it.

In October of 2013 (via the outstanding PJMedia), Arabic language media offered compelling evidence that tied the attack on the U.S. Consulate in Benghazi to Egypt's Muslim Brotherhood. 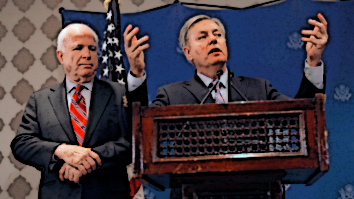 Multiple Arabic media sources have reported that the purpose of the Libyan intelligence chief’s recent trip to Cairo was to share information about Mursi’s involvement.

Other Arabic sources (1, 2, 3), including Masress, have reported on the details of the charges being filed against Mursi. They involve his release of [terrorist Mohammed Jamal] Al-Kashif... If Mursi was involved, what were his possible motives? Indisputably, the two most prominent voices as of late demanding the release of “Blind Sheikh” Omar Abdul Rahman were Ayman Al-Zawahiri and Muhammad Mursi. Interestingly, Mursi made such a demand before and days after the attacks in Benghazi.

Word of Egypt's involvement in the assassination of Ambassador Christopher Stevens had circulated in intelligence circles since September. Raymond Ibrahim reported then on a troubling Libyan intelligence document. It asserts that the Muslim Brotherhood, including Egyptian President Morsi, were involved in the September 11, 2012 terrorist attack on the U.S. consulate in Benghazi.

On Wednesday, June 26, several Arabic websites ... quoted the intelligence report, which apparently was first leaked to the Kuwaiti paper, Al Ra’i... It discusses the preliminary findings of the investigation, specifically concerning an “Egyptian cell” which was involved in the consulate attack. “Based on confessions derived from some of those arrested at the scene” six people, “all of them Egyptians” from the jihad group Ansar al-Sharia (“Supporters of Islamic Law), were arrested.

According to the report, during interrogations, these Egyptian jihadi cell members “confessed to very serious and important information concerning the financial sources of the group and the planners of the event and the storming and burning of the U.S. consulate in Benghazi…. And among the more prominent figures whose names were mentioned by cell members during confessions were: Egyptian President Mohamed Morsi; preacher Safwat Hegazi; Saudi businessman Mansour Kadasa, owner of the satellite station, Al-Nas; Egyptian Sheikh Muhammad Hassan; former presidential candidate, Hazim Salih Abu Isma’il..."

This jibes with original reporting from September 2013 by Walid Shoebat. A cellphone video taken during the attacks depicts gunmen running toward the camera. At one point an approaching gunman cries, "Don't shoot us! We were sent by Morsi!"

In October of 2012, a comment by "Kozy" posited that the Benghazi attack was an "October Surprise". Easily dismissed at the time as some sort of conspiracy nonsense, with each passing day the scenario appears to become more plausible:

• In May, U.S. Ambassador to Libya Gene Cretz is swapped for Chris Stevens.

• In June, Egyptian President Morsi publicly pledges to secure the release of 'The Blind Sheikh', the extremist cleric responsible for the first World Trade Center attack.

• Also starting in June, Ambassador Stevens' security teams are systematically removed from Libya, despite increasingly urgent requests and dire predictions. As the State Department itself confirmed in testimony before Congress, there were no budget cuts involved: the removal of security occurred at the sole discretion of the Secretary of State. By the time of the 9/11 attack, Stevens has not a single personal bodyguard. These stunning actions effectively remove any barriers to the capture of the Ambassador for use as a hostage.

• Did back-channel communications between the White House and the Blind Shiekh's legal representatives confirm that a swap could be achieved with a high-level hostage exchange? Were the Sheikh's cronies informed that Ambassador Stevens had no security in Benghazi? This would enable the Sheikh to be secured through a trade after capturing Stevens; after all, the ambassador has had his security teams completely stripped away.

• Someone -- it is not clear who -- arranges a meeting between Stevens and Turkish Consul General Ali Sait Akinin in Benghazi, not Tripoli, late in the evening of 9/11. It is during this meeting that terrorist checkpoints are established around the compound. The terrorists know precisely where Stevens is and are prepared logistically to capture him.

• The initial attack involves only small arms fire. In fact, no one appears to have been killed at the consulate by gunfire. Smoke inhalation was reportedly the cause of the deaths of Ambassador Stevens and attache Sean Smith after a fire was ignited by terrorists. In other words, the lack of RPG and mortar rounds during the initial attack means it is possible that the operation was a "smash and grab" designed to capture the Ambassador, not assassinate him. RPGs were only used later at the annex, hours later, after Stevens was known KIA.

• And, as stated above, during the initial attack, a video shot via camera phone records men yelling "Don’t Shoot us! We were sent by Morsi!"

Under this operating theory, had all gone according to plan, the Obama administration would have secretly facilitated the capture of Ambassador Stevens. This would have permitted Obama to safely trade the Ambassador through the release of the Blind Sheikh.

The trade of the Sheikh for Stevens would have occurred, of course, just before the election. Obama would take very public credit for Stevens' safe return as well as a newly strengthened relationship with Egypt's Morsi.

Photo ops featuring Obama and Stevens would be splashed along the campaign trail, ostensibly solidifying the president's foreign policy qualifications.

• Why did State repeatedly deny requests for more security in Benghazi, despite increasingly dire predictions? Instead, State completely stripped security from Stevens. No credible explanation has been offered for the removal of security by the White House or the State Department. It has been confirmed that the budget excuse proffered by State was completely false.

• Who arranged Stevens' meeting with Turkish Consul General Ali Sait Akinin in Benghazi, not Tripoli, so late in the evening on 9/11?

• Why on 9/11 -- of all dates -- was there no special security posture ordered in diplomatic installations around the Middle East?

• Why did so many people in the administration publicly lie about the nature of the attack when it was clear from the onset that it was an organized attack by terrorists?

• Why is President Obama lobbying so hard for the release of Muslim Brotherhood terrorists including Mursi?

• Why did the president disappear after getting word of the attack and never even visit the Situation Room during the 10-hour running gun battle (according to spokesman Tommy Vietor)?

• Why did he reportedly refuse security briefings in the aftermath of the attack, instead simply departing for a fundraiser in Las Vegas?

The operating theory being: the President didn't need to stay informed after hearing of the attack. He didn't need any briefings. He knew exactly what had happened.

A review of the Complete Benghazi Timeline makes some of these anomalies apparent. It's time for the Select Committee on Benghazi to uncover the truth.

Four dead Americans and their families deserve the truth, not lies and cover-ups, about what happened and why. 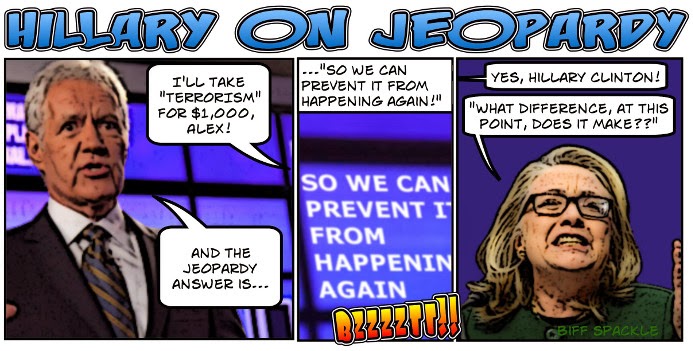 Fast forward to May 2014 and this "crazy conspiracy theory" is still as viable an explanation as any we have. There must be a damned good reason for all the obstruction and obfuscation by Barack Obama and Hillary Clinton.

Never -- never -- in our nation's history have our people been left behind, allowed to be slaughtered without lifting a finger to help. I keep thinking of Tyrone Woods and Glen Doherty, as they drew their last breaths, realizing that the country they had dedicated themselves to had let them down.

Obama, Killary, Pelosi, Reid, Cummings, Rangel and all the sick, detestable people trying to trivialize the Benghazi tragedy should be lined up against a wall and shot. I don't know how they sleep at night. All they worry about is themselves and their "party" and loss of power and influence. They are despicable monsters. Hideous, un-American, traitorous MONSTERS.

The reason the planned abduction of Stevens occurred is the fact that two Seals discarded a stand down order and, fought back - saving at least 30 americans while killing 200+ of the enemy. That was not part of the pan and, caused Stevens to be sodomized and killed.
The reason for barry to lobby hard for morsi's release is most likely 'black mail'. He figures - if he can get morsi off thehook -he'll be safe.
If you go to Walid's website - he has in his archive a signed document by morsi among others - a bribe paid by barry in the amount of 8 billion taxpayer dollars. Thosewho received the money have signed the document.

That is the real reason why he continue to lie andobfuscate!