BILLIONS WASTED: Obamacare Contractor Pays Employees To Do... Absolutely Nothing

Under a Republican administration, this would be a huge scandal. Above-the-fold coverage in The New York Times for weeks on end. The lead story on the network news. You know the drill.

Given this administration, however, suffice it to say that you'll only see this immense waste of taxpayer dough on a few select outlets willing to speak truth to power.

Please note that this investigation was the product of an intrepid, local news team at St. Louis KMOV.

And anyone with a modicum of sense knows that this is but the tip of the iceberg.

An employee of Serco, a company with a $1.2 billion government contract to handle paper healthcare applications has some rather interesting, and believable claims. 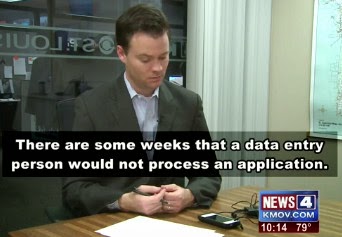 "There are some weeks that a data entry person would not process an application. The main thing is the data entry side does not have hardly any work to do. They're told to sit at their computers and hit the refresh button no more than every 10 minutes. They're monitored, to hopefully look for an application. Their goals are to process 2 applications a month, and some people are not even able to do that. There are centers in Missouri, Kentucky, and Oklahoma. 1,800 people trying to get 1 of 30 application that pop up. Serco, gets paid for the number of people they employ. So they want us there even if we are not doing anything."

Others complain as well. The video shows online comments from an alleged former employee "This place is a JOKE! There is nothing to do - NO WORK."

Serco refused to answer questions about the news investigation.

The center for Medicare and Medicaid issued this preposterous statement: "Serco is committed to making sure federal funds are spent appropriately."

The reporter adds, "Our employee says every person who works here is happy to have a job, and wants to work hard. But frustration is mounting. Serco's contract is worth upwards of $1.2 billion."

The anonymous employee says the contract gets paid by the federal government per employee hired. Which is why it's in their interest to have a bunch of employees sitting around all day doing nothing.

That's right: the Obama administration is paying Serco per employee hired, not by work performed, applications processed, or any other reasonable measure.

Of course, it's not their money they're wasting, is it?.

But I'm sure single-payer would be awesome, dontchaknow.

What I once thought was a decent looking job turned out to be something like this--nothing to do but look busy for eight hours. I had to create "tasks" to fill the time like "walk to the dumpster on the other end of the building with a wastebasket." I lasted about two months before the boredom became unbearable and I quit.

I don't think I'd want to spend a minute in the company of a person for whom this is an ideal job.