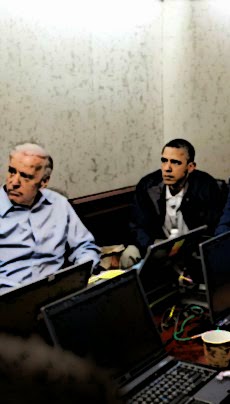 With her memoir, Hard Choices set to be released in the coming weeks, former Secretary of State Hillary Clinton and her publishing company have provided an excerpt in which she claims President Obama’s actions during the Bin Laden raid were “as crisp and courageous a display of leadership” that she had ever seen.

Here are 7 reasons that Obama’s leadership during the raid was neither crisp or courageous.

Clinton writes about one of the strongest examples of decision-making under pressure:

“Perhaps the most famous example from my four years as Secretary of State was President Obama’s order to send a team of Navy SEALs into a moonless Pakistani night to bring Osama bin Laden to justice. The President’s top advisors were divided. The intelligence was compelling, but far from definitive. The risks of failure were daunting.”

The Clinton memoir tries to paint a picture of decisiveness despite “risks of failure” and “far from definitive” intelligence. President Obama made the call despite the numerous doubts. That isn’t necessarily the case, however.

According to a book released in August of 2012, titled Leading from Behind: The Reluctant President and the Advisors Who Decide for Him, a source “with Joint Special Operations Command who had direct knowledge of the operation and its planning,” claims that Obama squashed the kill order on bin Laden in January, February, and March of 2011. Bin Laden was successfully taken down in early May.

2) Obama’s Indecisiveness Was Decided For Him

According to that same book, the three canceled kill missions were done so at the urging of the President’s close advisor, Valerie Jarrett.

… Richard Miniter writes that Obama cancelled the “kill” mission in January 2011, again in February, and a third time in March. Obama’s close adviser Valerie Jarrett persuaded him to hold off each time, according to the book.

The stakes were significant for America’s national security, our battle against al Qaeda, and our relationship with Pakistan. Most of all, the lives of those brave SEALs and helicopter pilots hung in the balance.

The lives of those brave SEALs were no longer hanging in the balance apparently, when in a meeting with Hollywood filmmakers on July 14th, 2011, the identity of a “planner, SEAL Team 6 Operator and Commander” was revealed.

New documents obtained by a watchdog group show our commander in chief gave the name of a Navy Seal Team 6 commander to the makers of a movie about Osama bin Laden.

While it took the watchdog group a federal lawsuit and nine months to obtain the documents due to national security concerns, the administration was willing to provide that information to filmmakers set to release a movie that would be a boost to the Obama campaign.

Two years after the raid that killed bbin Laden, families of several members of Navy Seal Team 6 held a press conference saying that President Obama and Vice-President Biden had revealed the identity of the service group that carried out the successful raid on bin Laden’s compound resulting in the terrorist’s death. That revelation subsequently led to a retaliatory target being placed on the SEAL team’s backs.

Just a few months after bin Laden was killed, a military helicopter carrying 17 members of SEAL Team 6 was shot down by a rocket-propelled grenade, killing those team members and 21 other people.

All the glory, none of the blame.

Former Attorney General Michael Mukasey went on the Sean Hannity show and made the startling claim that the Obama administration had drafted a memo designed to lay blame at the feet of the military had the mission to kill Bin Laden faltered.

Former Attorney General Michael Mukasey told Sean Hannity on Friday that the Obama Administration drafted a memo to protect the president from blame if the mission to kill or capture Osama bin Laden would have failed. That way Obama could blame the general instead of taking the blame himself. Mukasey wrote about it this week in The Wall Street Journal.

“That was a highly lawyered memo (designed to protect the president politically)… I think there’s going to be more that’s going to be tumbling out about that escapade but so far that memo is enough.“

Was it necessary for the administration to draft a memo to protect the President from political responsibility had the mission failed? Isn’t that the job of the media?

6) If He Was Willing to Blame the Military, Obama Should Have Credited Them As Well

The courageous leadership moves were actually made by an Admiral McRaven, the true hero in greenlighting the bin Laden kill operation.

… Only the memo doesn’t show a gutsy call. It doesn’t show a president willing to take the blame for a mission gone wrong. It shows a CYA maneuver by the White House.

The memo puts all control in the hands of Admiral McRaven – the “timing, operational decision making and control” are all up to McRaven. So the notion that Obama and his team were walking through every stage of the operation is incorrect. The hero here was McRaven, not Obama. And had the mission gone wrong, McRaven surely would have been thrown under the bus.

The memo is crystal clear on that point.

Instead, here is a summary of the President’s speech in announcing bin Laden’s death (h/t Ace of Spades):

7) Aide Claimed Obama Was Playing Cards During the Raid

Former Obama aide Reggie Love claimed that President Obama couldn’t watch the entire raid unfold in the Situation Room, so a group of people joined the President in playing cards instead.

Despite the picture the White House released showing President Obama intently watching the raid that killed Osama bin Laden, his former “body man” says the president spent most of the raid playing a card game.

“Most people were like down in the Situation Room and [the president] was like, ‘I’m not going to be down there, I can’t watch this entire thing.’ So he, myself, Pete Souza, the White House photographer, Marvin [Nicholson], we must have played 15 games of spades,” former Obama aide Reggie Love said …

The cards may have been crisp, but the President’s decision making during the raid were not.

Read more at The Political Insider