When it comes to double standards and intellectual dishonesty, the modern Democrat Party takes the cake.

Recall that Republicans participated in Democrat-initiated Select Committees -- most notably those related to Watergate and Iran-Contra -- but Nancy Pelosi and her sycophants in the House have never been big fans of integrity or patriotism. 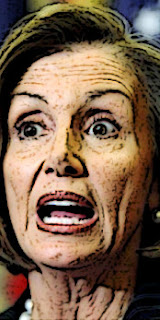 House Minority Leader Nancy Pelosi has rejected the terms of a GOP-created select committee on Benghazi, but Republicans are moving ahead without them...

...Pelosi, D-Calif., rejected the panel's terms in letter to Boehner that was in response to GOP proposal about the select panel would operate.

Democrats say they are concerned it will not allow their party to participate fairly in the investigation, which will involve subpoenas and viewing of classified materials related to the Sept. 11, 2012, attack on the U.S. consulate in Benghazi.

According to a Democratic leadership aide, Pelosi rejects a rule that will not prevent chairman Trey Gowdy, R-S.C., from issuing unilateral subpoenas without consulting with Democrats. The rules would also allow Republicans to prevent Democrats from interviewing witnesses.

Sounds like Republicans are giving Democrats all the deference they are due after the GOP was shut completely out of giving input into the health care abortion that became Obamacare.

Benghazi is a big deal. It is a scandal. American heroes were fighting for their lives, fighting for hours against hundreds of Al Qaeda-linked terrorists, screaming into comm systems for help because they knew -- they knew -- a Commander-In-Chief would never leave any man behind.

But they were wrong.

The President and Secretary of State Hillary Clinton were AWOL. It was 3AM in Benghazi... and no one answered the calls for help.

She played her cards.

I wonder if she knows she played a pair of aces against a full house?

I do believe that while the Republicans are just as capable of assessing all the political angles of this situation as the Democrats, and it may well be tit for tat as the writer suggests. But I am of the impression that Rep. Gowdy is taking heed of running the Select Committee as tightly as one of the criminal investigations he conducted -- so that committee's findings will not be "thrown out" or taint the proceedings so as to cast doubt on the entire investigation. Also, after the revelation of Rep. Cummings' involvement with the IRS's potentially criminal activities against America's conservative groups and individuals while serving as the ranking Minority member of the House Oversight and Government Reform Committee, perhaps Gowdy is simply invoking tough rules to prevent that kind of back door shenanigans from happing to this investigation. It's ironic that the Democrats should complain about the make up of the Select Committee on that last point, alone.

This is a murder investigation and should be investigated with the thoroughness of a school shooting:
Who did it, how they get in, police response time, background of the perps, where the weapons came from,
etc, etc.

The dems want to sit it out in protest? Let 'em. The MFM won't cover it, but the New Media will. It's actually a major improvement this way!

Nancy really is a bimbo.

For being a 'bogus' issue and so yesterday - democrats sure attempting to throw sand into Gowdy's yes don't they.

If there was no wrong doing why all the fuzz?

Democrats know exactly what's at stake and, trying anything and everything to throw a money wrench.