War On Terror: The chairman of the House Intelligence Committee reminds us of why our friends no longer trust us, our enemies no longer fear us and that un-friending terrorists on social media is not a foreign policy. 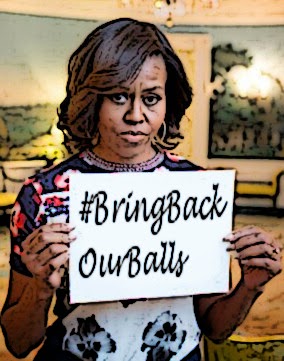 We've all seen the photo of first lady Michelle Obama holding up a sign with the hashtag slogan "Bring Back Our Girls." It underscores a totally unserious foreign policy that relies on gimmicks and reset buttons as Russia and radical Islamists go on the march.

"You can't base your policy on what's trending on Twitter," House Intelligence Committee Chairman Mike Rogers said on CBS' "Face the Nation" on Sunday, a day after the first lady made her Mother's Day Twitter hash-tag appeal to put social media pressure on the Islamist terrorists of Nigeria's Boko Haram. The group abducted 276 Nigerian schoolgirls and has reportedly converted some who were Christians to Islam.

Delivering the Saturday radio address, Mrs. Obama seemingly framed the incident as part of some sort of sexist war on women, as one of "grown men attempting to snuff out the aspirations of young girls."

She did not mention that the schoolgirls are Christian and their abductors are Islamist, or that while Boko Haram abducts girls from schools to be sold as wives or slaves, it kills the boys outright.

This White House sees social media as substitutes for action and as excuses for its foreign policy failures, such as Secretary of State Hillary Clinton's in Benghazi.

Rogers, R-Mich., said we need to acknowledge a "new ecosystem of terrorism ... from Nigeria all the way across northern Africa ... to Pakistan and Afghanistan." It requires "more than hashtags and selfies."

He added, "This is a huge and growing problem that's really been relatively ignored."

Rogers criticized the administration for not designating Boko Haram a terrorist organization years ago. Clinton, meanwhile, expressed her concern in a May 4 tweet, also with the hashtag "BringBackOurGirls."

Yet, the Clinton State Department for two years refused to place Boko Haram on the list of foreign terrorist organizations despite being urged to do so by the CIA, the FBI and, yes, even the Justice Department.

Boko Haram is just the tip of the iceberg of a global Sharia-based Islamist war on women and on Western civilization itself.

Such is the message of Ayaan Hirsi Ali, affiliated with Harvard's school of government, who had honorary degrees from and an invitation to speak at Brandeis University rescinded because she refuses to ignore the true nature of Islamist repression.

Born a Muslim in Somalia, where she was forced by her grandmother to undergo genital mutilation at age 5, Hirsi Ali grew up in Kenya, renounced Islam and found her way to America.

Writing in the Wall Street Journal, she says it's "time for Western liberals to wake up ... The kidnapping of these schoolgirls is not an isolated tragedy; their fate reflects a new wave of jihadism that extends far beyond Nigeria and poses a mortal threat to the rights of women and girls."

And all the tweets in the world won't change that.

It is obviously true that sending out tweets is not likely to pressure terrorists to suddenly become nice and loving people. But adding their names to a list of terrorist organizations isn't going to do any more. Do you think the terrorists will say, "Oh no, they put our names on a list of TERRORISTS? We must rethink the means that we have been using to pursue our goals!" Here's a suggestion for something that might work: Shoot them. Then we don't need to worry if they'll read these tweets or strongly-worded diplomatic messages. They won't, because they'll be dead.

What, a simplistic slogan campaign is not working against terrorists??!! surely you jest!!!