I think I may have done this in high school when I detonated a dozen M-80s in a coffee can. I mean, when a friend did that.

E = mc². It’s one of the most basic and fundamental equations throughout astrophysics. But it does more than suggest that mass and energy are interconnected, it implies that light can be physically transformed into matter.

But can it really — physically — be done? Scientists proposed the theory more than 80 years ago, but only today have they paved the way to make this transformation routinely on Earth. 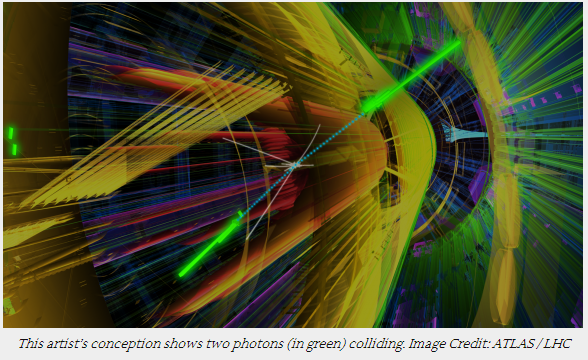 ...In 1934, two physicists Gregory Breit and John Wheeler proposed that it should be possible to turn light into matter by smashing together only two photons, the fundamental particles of light, to create an electron and a positron. It was the simplest method of turning light into matter ever predicted, but it has never been observed in the laboratory...

This experiment will be a first in that it doesn’t require the addition of massive high-energy particles. It will be performed purely from photons.

The concept calls for using a high-intensity laser to speed up electrons to just below the speed of light, and then smash them into a slab of gold to create a beam of photons a billion times more energetic than visible light. At the same time, another laser beam would be blasted onto a hohlraum — a small gold container meaning “empty can” in German — that would create a radiation field with photons buzzing inside.

The initial photon beam would be directed into the center of the hohlraum. When the photons from the two sources collide, some would be converted into pairs of electrons and positrons. A detector would then pick up the signatures form the matter and antimatter as they flew out of the container.

...“Within a few hours of looking for applications of hohlraums outside their traditional role in fusion energy research, we were astonished to find they provided the perfect conditions for creating a photon collider,” Pike said. “The race to carry out and complete the experiment is on!”

I wonder if these physicists ever get concerned that one of their creative experiments will result in Total Protonic Reversal.

To get a sense of what that means, try to imagine all life as you know it stopping instantaneously and every molecule in your body exploding at the speed of light.

Which also happened to me a friend in high school, I think.

at 8:55 PM
Email ThisBlogThis!Share to TwitterShare to FacebookShare to Pinterest
Labels: Scitech, Water-cooler