Writing at The Spectator, Liam Halligan summarizes the troubling nature of the state of the global economic system:

...alarming evidence is amassing that the global recovery is shaky, stock markets are over-hyped and the large western banks, for all the talk of reform, remain a serious liability. The reality, and it gives me no pleasure to write this, is that we could see a re-run of the ghastly credit crunch of 2007/08.

To paraphrase Clubber Lang, the following are 15 reasons that the central banking party fueling our economy will end in "pain". 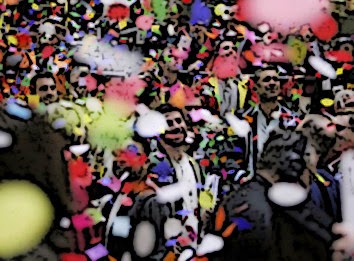 1. The US Gross Domestic Product fell at an annual rate of 2.9 per cent on official figures, the first drop we’ve seen since the dark days of 2011.

2. The Eurozone, meanwhile, remains on the brink of recession, with GDP across the 18-nation currency area expanding a mere 0.2 per cent.

3. Despite this lack of growth, stock indices in the US and across the western world have repeatedly hit all-time highs in recent months.

4. Even though U.S. GDP is contracting and that US first-quarter corporate earnings were down 3.4 per cent, the S&P500 (the world’s most watched stock index) has broken its daily closing price record more than 20 times this year.

5. The reason for this dichotomy is the Federal Reserve’s money-printing machine, which has created thousands of billions of virtual dollars since 2008. Much of this has found its way into global stock markets, sending equity prices sky-high. Designed as an emergency measure, QE has since become a lifestyle choice, the financial and political equivalent of crack cocaine.

6. While the Fed has begun ‘tapering’ -- slowing down the rate of its de facto money–printing -- the scale of QE remains vast, some $45 billion a month. That’s driven the absurd ‘bad news is good news’ mantra in which weak economic numbers make it more likely the Fed will relent and slow down or even reverse its tapering, turning up the funny–money dial, and thus stock prices, even more. Forget economic growth and forget corporate earnings. It’s all about the Fed.

7. Even insiders are growing troubled, with the Swiss-based Bank for International Settlements, an umbrella organisation for the world’s leading central banks, warning of ‘euphoric’ equity valuations. ‘It is hard to avoid the sense of a puzzling disconnect between the markets’ buoyancy and underlying economic developments globally,’ it argued in its annual report published earlier this month.

8. Systemic global risks today may be greater than before the Lehman crisis, the BIS warns, as debts have risen. Across the developed world, the average combined public and private debt ratio is at 275 per cent of GDP, compared with 250 per cent in 2007.

8. With QE having pumped up credit markets across the developing world, many of the large emerging markets are now in the throes of a dangerous credit boom. Such countries have taken on over $2 trillion of foreign currency debt since 2008, the BIS points out. Having helped stabilise the global economy after the last credit crunch, even helping to pay for western bailouts, the big emerging markets now themselves pose systemic risks.

9. For those willing to look, numerous technical stock-market indicators are now flashing red. For one thing, the S&P500 sports an average cyclically adjusted price-earnings ratio of 25.6, according to Professor Robert Shiller of Yale University. That’s way above the historic average of 16.5, suggesting prices are unsustainably high.

11. US stocks have gained over 200 per cent since 2009, despite the lack of a convincing economic recovery. Last year, the S&P500 rose no less than a third.

12. Experts are particularly concerned about the growth of derivatives, designed for the legitimate hedging of risk but famously dubbed ‘weapons of financial mass destruction’ by American investment guru Warren Buffett. Total global derivatives outstanding currently amount to $620 trillion, a jaw-dropping ten times global GDP and back above the pre–Lehman total.

14. The balance sheets of the six largest western banks totalled $14.6 trillion at the end of 2012, compared with $10.7 trillion in 2007. In March, the International Monetary Fund admitted such banks still receive annual implicit subsidies of $590 billion, with creditors judging that state bailouts will indeed be forthcoming when reckless, highly leveraged investments go wrong. This flies in the face of political rhetoric that the problem is solved and taxpayers will never again have to bail out bonus-fuelled traders.

What? You think I didn't know there were two number 8's? I was just testing you.

But what about 13? Too unlucky?

How I envy people who can count to fifteen at 6:30 in the morning.

The new acronym going around is BTFATH - Buy the f-ing all-time high.

That's something careful investors generally avoid, but now we see even some bears doing it. The short positions have been all but completely squeezed out.

When there are no more contrarians in the market, it's called "capitulation" and usually means we are in for a big correction.

The one reason above all that matters:

We being stripped mined to our last buck by the 12 banking families of the federal reserve, which is neither, of our intrinsic wealth. Right down to every last penny. And "our" "government" is part of this scheme to steal us blind of everything.
It is insanity.
Run by and orchestrated by psychopaths, an entire system of absolute crooks and thieves.

If you doubt my observation, answer me this question:
Who is paying for all this "wealth transfer"? Where is it got to come from?

Think about that, then look at what is left for to be stolen from us. Cause it ain't fiat money, better than 90 percent of our dollars intrinsic value is gone, poof!

It is the value and wealth they are strip mining us of hidden in our homes, on our land, and in our productivity and culture. The wealth of our system of prosperity and happiness. They robbed us of our money through fiat schemes and the agenda to destroy the system of Liberty.

Now they are taking everything else, it's plundering plain and simple, a sacking of the west. They intend to turn us into a third world banana republic.

Funny as it sounds, I believe in the indomitable spirit of free Americans. How we will put up with quite a lot, because it is people of America who live by their druthers and sweat of their backs who have a instrumental part to play in whats going down and is being done to us.

Where once there are no peaceful remedies or results driven avenues of recourse remaining, it will be violent redress, a ruthless merciless comeuppance. The likes of which no tyrants and their henchmen can imagine out of a middle-class productive class of heretofore benign civil culture.

Make no mistake all who read my words of thoughtful wit, they are not idle thought nor wishful reasoning. When folks like me have had enough combined with a confident understanding there are no results driven avenues of righting whats wrong within the confines of peaceful and civil contract, no army or corruptocrat, one world order psycohpath bankster or what have you will be able to do a damn thing about the payback and retribution coming their way they so richly deserve.

Nothing will stop it.
Till every source of tyranny is eradicated and exterminated.

This is they way of things of a man's Liberty.

For those who discount this premise, think where we came from and where we are. Liberty is nothing to be trifled with, our arms are nothing to scoff at. Our industriousness and ingenuity has no equal. But it is ourselves, our quiet capability of resolve, never say die indomitable spirit, that is...indomitable.

Bad as things seem, the end of this great idea, this 5000 Year Leap of Liberty Prosperity and Happiness isn't finished. Down in a low point yes, but what's going to happen to raise it to preeminence has been building for as long as the forces of tyranny have been trying to undermine the foundations of this here Republic.
Those forces are very afraid of this truly grass roots resistance to their tyranny.
Terrified.
Rightfully so.
That is as it should be.
If you still doubt my thoughts on our greatness of spirit. Ask yourself this one thing:
If I, a simple blue collar working man can sense these things of us, so can another American, and understand what we are capable of and the opportunity to finish what our founders left for us, and left us to complete.
Just imagine what we can achieve then.

No, this great nation ain't finished, not by a long shot it ain't.