IN MEMORIAM: The Anti-Bill Ayers 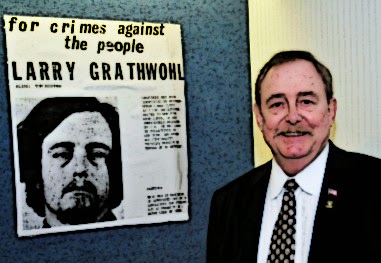 Few people have heard of Larry Grathwohl, but the anniversary of his death, on July 18, 2013, is fast approaching. We lost an American hero that day, but like many, he died in relative obscurity. That we don't publicly honor such men as a matter of public policy - never mind tradition - is a stark indication of how singularly self-absorbed, careless and contemptuous of selfless sacrifice our political and media classes have become.

Larry served with the 101st Airborne during the Vietnam War, and joined the Special Forces "Hatchet Force" teams. These 40 - 100 man units were sent on search and destroy missions in some of the most dangerous areas, to rescue and/or locate smaller Special Forces squads who regularly got into trouble with much larger North Vietnamese elements determined to wipe them out.

Returning from the war, he learned about activities of the Weather Underground and determined on his own to find out more about them. He subsequently became an undercover informant, first for the Cincinnati police, then the FBI. He was the only person to successfully penetrate the communist group, and his testimony might have sent two of its leaders, domestic terrorists Bill Ayers and Bernardine Dohrn, to jail for a very long time. However, Ayers and Dohrn managed to avoid prosecution on a technicality. As Ayers later said "Guilty as Hell, free as a bird. What a great country!"

Grathwohl recounted his experiences as an undercover informant in a 1977 book, "Bringing Down America: An FBI Informer With the Weathermen." Larry and friends had celebrated the relaunch of this important book just a few months before Larry passed.

Those of us who knew Larry and his brave, single-handed efforts against the Weathermen were outraged when in late June of this year, Megyn Kelly of Fox News gave Bill Ayers an extensive interview. Kelly lobbed a few provocative questions at him, and mentioned the San Francisco Police Park Station bombing in 1970 - something that the media has rarely mentioned. But she allowed him to get away with lie after lie, even claiming the Park Station bombing had nothing to do with the Weathermen.

She never brought up any of the extensive evidence provided by Larry Grathwohl and others that the bombing - which took the life of police Sgt. Brian V. McDonnell - was conducted by the Weathermen. Kelly could easily have cited, with photos, the Weather Underground's bomb factory, discovered by the FBI in San Francisco, complete with fingerprints of Bill Ayers and Mark Rudd (another Weather Underground member). Grathwohl has testified that it was Ayers' wife, Bernardine Dohrn, who actually placed the bomb and that Ayers was fully aware of that fact.

Kelly asked only one question about Grathwohl in her interview, an incredible slight, considering the great personal sacrifices and risk Larry took, and the wealth of information and insight into the Weather Underground that he provided. Ayers responded that Larry had been a member of the Students for a Democratic Society (SDS) which he had nothing to do with. Kelly never challenged him on this multiple lie.

For five years, Cliff Kincaid of America's Survival and others have waged a battle to reopen the McDonnell murder case and see that justice is done. In honor of Larry, and to help spread the word, July 18th has been designated as "Blog About Larry Grathwohl Day. If you have a blog, write about Larry, his sacrifices and the evidence against Ayers and Dohrn. Follow the links embedded in this article, or simply go to America's Survival, to get all the documentation you need.

The Weather Underground was a communist organization with ties to Cuban, North Vietnamese and Soviet intelligence. Anyone who understands how communists work knows that, just like the Mafia, once you join up with the communists, you never quit. That should be unsettling to all patriotic Americans, given Ayers' deep and long-term relationship with President Obama - all the more reason to see justice done for the man whom, by his own admission is "guilty as Hell."

I remember seeing a TV interview with him where he was talking about a discussion among the Underground Weathermen where he asked them what if they were successful, what would happen to the people who "believed" differently. Their response was that they would set up retraining camps across America. When he asked them what they would do with the people who could not be retrained? They responded they would have to be killed. When he asked them how many they would be willing to kill, they said 30 million. Guess that proves they really were communists...it didn't matter how many people had to be killed to reach their utopia vision of equality (in reality, their desire for total power).