SHOCK: Israelis line up Muslims next to mass graves and execute them

Did I say "Israelis"?

I meant to say "Muslims"

I posted this video on the previous post. Youtube removed it, probably due to mass reporting for horror in content. The last part of the video actually does contain a great deal of harsh violence. But this violence is the modus operandi of the muslims who are taking over more and more parts of Iraq and Syria.

It needs to be seen at least once and believed always. However that is not the most important significance of this video. Most of us by now have seen several jihadi videos of sadistic and even pornographic violence done by muslims and even justified by scripture in some of them. This one however was done with a kind of honesty that I have not seen before. 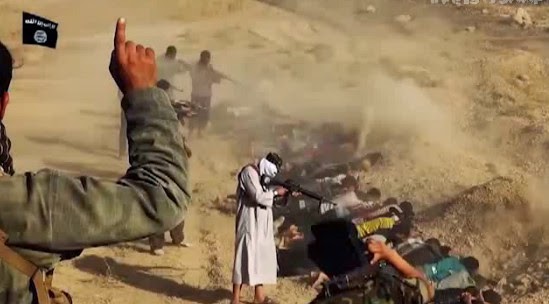 This cannot be dismissed for geopolitical reasons or any of the other typical leftist blather.

I wonder what Dear Leader and his brilliant Secretary of State -- John Kerry -- have to say about this?

Nothing of interest here, so just forget you saw this.

And the Muzloids who live here want us to respect their religion? It's time to roll out the un-welcome mat and ship them all back to the sand box. When they renounce Islam and start eating ham sandwiches we'll consider letting them back.

We should do all we can to encourage muslims to kill each other.

Doug, I just want you to know that I am honoured that when I reposted this, I got suspended on Facebook for seven days, starting today. I have a backup profile so I don't really care, but I hope you wear this as a badge of honour as I am.