MAKE SURE YOU'RE SITTING DOWN: MS-13 Actively Recruiting Obama's Flood of Illegal Aliens at U.S. Shelters 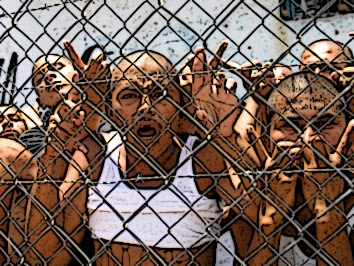 JW has reported extensively on the crisis created by the sudden influx of mostly Central American minors that have crossed into the U.S. through the Mexican border in recent weeks. It has created havoc and will end up costing American taxpayers billions of dollars to house, process, medically treat, feed and inevitably educate the Unaccompanied Alien Children (UAC) which are being dispersed throughout the country. They are bringing in dangerous diseases—including swine flu, dengue fever, Ebola virus and tuberculosis— and occupying our military bases as shelters.

As if all this weren’t bad enough, the invasion is also supplying the nation’s most dangerous street gangs with new soldiers. The Mara Salvatrucha (MS-13) and the 18th Street gangs are on a recruiting frenzy at the various facilities housing the newly arrived illegal aliens, according to JW’s source. The MS-13 is a feared street gang of mostly Central American illegal immigrants that’s spread throughout the U.S. and is renowned for drug distribution, murder, rape, robbery, home invasions, kidnappings, vandalism and other violent crimes. The Justice Department’s National Gang Intelligence Center (NGIC) says criminal street gangs like the MS-13 are responsible for the majority of violent crimes in the U.S. and are the primary distributors of most illicit drugs.

The 18th Street gang is considered the largest organized gang in Los Angeles County with about 15,000 members that operate a number of criminal enterprises throughout the region. Last year ten of its leaders were indicted for running a large-scale methamphetamine and drug trafficking business in South Los Angeles. A local newspaper report about the case says 18th Street gang leaders deported from the U.S. in the 1990s helped spread the gang across Central America and into Mexico. It’s not unreasonable to conclude that some of the members are among the tens of thousands of UACs that have entered the U.S. recently.

In fact, last month the president of the Tucson Border Patrol Union, veteran agent Art Del Cueto, confirmed to JW that the UACs are not all little kids as the media was largely reporting at that point. Many are in their late teens and have possible ties to gang members, Del Cueto said. After seeing the first few batches of UACs, Del Cueto immediately expressed concern that the illegal aliens would be relocated in the U.S. with family despite affiliations with criminal enterprises.

That makes this week’s insider report of violent gangs openly recruiting UACs—with the help of phones provided by a well-known charity—all the more appalling. JW’s inside source is on the ground and has received first-hand reports from federal agents at the scene. “MS-13 and 18th Street gangs are actively recruiting new members at our detention centers,” the source confirms. “The new gang members then use the Red Cross phones to sign up.”