A World Without Mark Levin

Try to imagine a world without Mark Levin.

A world in which the Constitution is seldom, if ever, mentioned and never thoughtfully discussed as society's rudder.

A world in which the rule of law is amorphous and no public voices decry these affronts, explaining the historical dangers associated with such acts.

A world in which the achievements of Locke, Montesquieu, Bastiat, Mason, Madison, Jefferson, Washington, Milton Friedman, and others are relegated to brief discussions in a few forlorn clasrooms. 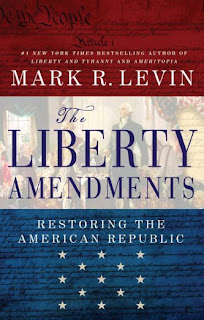 A world in which the word statist is never uttered and the consequences of statism are never discussed.

A world in which the go-along-to-get-along Republican establishment -- the descendents of the Nixon, Rockefeller and Ford wing of the country club neo-statists -- are never held to account.

A world in which the intellectual underpinnings of conservatism are never dissected piece by piece, explained, and then reassembled in terms revealing, enlightening, and bracing.

A world in which the Framers are never discussed, nor the critical arguments they had among one another during America's founding are long forgotten.

A world in which the moral, philosophic, legal, and economic tenets undergirding societies both new and olden are ignored and generally forgotten.

A world in which the authoritarian malevolence of the ruling elites in Washington is never discussed and those promoting lawless behavior never named.

A world in which the few voices willing to oppose the elites in Washington -- the privileged ruling class of both parties -- are never celebrated or cheered.

A world without a simple playbook, authorized by the Constitution itself, for addressing an authoritarian government that has grown monstrous and detached from the citizenry and is simply unwilling to reform itself.

A world without a spokesman for America's greatness.

A world in which those who are conservatives can't easily describe why it is they believe as they do.

But we have this much: we have Mark Levin.

Say a little prayer tonight: we have Mark Levin.

Sins of omission, the subversives stock in trade. When a Democrat tells you he doesn't mind paying 15 dollars a pound for sliced lunch meat because he only pays .50 cents a gallon for gas it is time for a conversation.

We can never thank Mark Levin enough. We must pray indeed. And thank you Doug Ross.

Constitutional conservatives could use an effective advocate. I wish we had such a person. Mark Levin is most definitely not that person. He is bat-shit nuts. Have you ever heard his radio show. He sounds like a lunatic. How could anyone take him seriously?

Sorry, Roark, you have no clue. You have confused passionate and intelligent commentary with sound. If you can't hear what Levin is saying because he "sounds like a lunatic", then you're not listening.

That is a scary thought. I go through withdrawal when he takes a day off...

Stay safe Mark; a lot of dangerous people hate you...

Funny how there is always a plant to steer conversation away from the fundamentals and get people into food fights or personal attacks.
Go Mark, not all America is America.

Mark Levin is a brilliant writer, and a brave voice for the Constitution of America. Three cheers for Mark Levin.

God Bless Mark Levin and all the courageous reasoned thought leaders of or time, from Sarah Palin to Doug Ross.

The point is that when Levin launches into his unhinged tirades, it turns off the people who need to be converted to constitutional conservatism. Either he thinks it's entertaining - or he actually has mental issues. Either way it does damage to our cause.

Ignore ML's massive bestsellers and the fact that his radio program is the fastest-growing show of its kind in the U.S. (which prove without a doubt that you are wrong).

Most of us know how to do that.

Roark - Your "cause" can't possibly be the constitutionalist conservative "cause". I, for one, have never heard Levin go off on an "unhinged tirade".

Maybe it's because I'm listening to the substance of his passionate monologues, and you just hear noise.

A cure for your hearing problem: Stop listening to the radio and try reading Liberty and Tyranny, Ameritopia, The Liberty Amendments and Men in Black. At least you won't be able to complain about the sound.

Get back in your clown car

I'm pretty sure that Mark Levin has contributed more to "the cause" than those who have complained about his passion and the way he expresses himself. Those traits have earned him the massive listening audience he has and converted untold numbers of people to "the cause." Sometimes people need a slap upside the head with brutal honesty to wake them from their passivity. I'm thinking those who are offended may have more to hide than they let on.

And right there is the losing strategy... The one the other side wants you to believe in order to shut you up!

Glad we have Mark but also let's support Hillsdale College in Michigan. Constitutional conservatives need to spread the word about Hillsdale's free on-line courses on The Constitution.

Mark is pissed off... and you're obviously NOT. You must be a RINO. This has always been the Republican problem - no fire in the belly, no passion, no GUTS.

I appreciate Mark's constitutional knowledge, enthusiasm, passion, and love of country. If you prefer mealy, mushy, subdued, passive, uncomplicated conversation while our country collapses then I would recommend Huckabee. Now there's a pile of mush for ya.

Thank you, Mark, for educating us and for having the #&@+'s to say what no one else will say, which is exactly what we're thinking should be said, while at the same time entertaining us and causing us to yell in agreement while we're driving home after a day of hard work...

Jerry said...
This comment has been removed by the author.
8:01 AM

Well, you do need intelligence and a knowledge of history and you need wisdom - to understand Levin's radio show.... but without that his show could be confusing to you....

Roark needs to stop drinking the Kool-Aid for sure. The definition of a radical: someone who is more passionate about something than you are. So even though Roark identifies himself as a Constitutional conservative he clearly is a lot less passionate about it than Levin (and most of us). The fact that he calls Mr. Levin bat-shit nuts proves that he's nothing more than a liberal who's not quite as compassionate about that either. Pick a side Roark....a double-minded man is unstable in all his ways.....

Mark Levin has done more to educate me personally on the value and meaning of the Constitution, and opened my eyes to what is really going on in Washington, than anyone else. He reminds me of one of those really tough teachers in school we all had and loved to complain about, but who, in retrospect, taught us more than any other teacher. I am grateful for his presence and insight.

I was deaf, dumb and blind until I read Liberty and Tyranny.

Roark: Is your complaint about the tenor of his speech, the binary absolutes he uses, or the actual principles he's upholding?

As Mark would say @Roark "SHUT UP YOU MEAT HEAD" And the shoe fits!

Thanks Mark for caring enough about Our Country that you put your passion and knowledge out there for those of us who need you as a mentor. God bless and keep you!!!!

If what you say is true, his audience would be shrinking. It is doing the very opposite and growing rapidly. His tirades more closely reflect what millions of Americans feel inside than anything else on radio or tv. His passion is infectious, not a turn off. What damage can you point to that he has done to the cause of conservatism?

Another idiot getting caught up with the delivery instead of hearing the message. Obviously you cant see the forest for the trees.

Thank You Olivedward - for pointing out the Truth about Mark Levin. Anyone that doesn't like him - can turn him off, it's that simple - even the simple minded Leftists might understand that.

Yea! He saw it, he read it, and was honored!
Well done, Doug Ross, Well done ~

You forget to mention Rescuing Sprite which tells one all one needs to know about Mark's character.

The same reasoning is why so many hate Sarah Palin....they are turned off buy her speech.

Sure shows you don't know
NYTHING ABOUT OUR CONSTITUTION or you wouldn't be against Mark Levin!!!!! you are a liberal: nasty word!!!!

Those that can't handle Mark Levin are weak and not up for the fight.

Roark, you have the power over yourself so use it get lost. Old wisdom said great minds think alike and obviously you don't clique so get out, there I said it.

Mark, you are wonderful. I look forward to your show every day. Thank you so much for all you teach about our beloved CONSTITUTION each and every day. I cannot imagine the world without you either. Many blessings to you and your family.

I you don't like how he "sounds" then read his books. Be's a brilliant writer and you'd most certainly learn a thing or two.

Mark, we just adore you. You are like a dear friend and just the sound f your voice gives us hope. You make us feel that we are not alone in our concern for what is happening to our country. A world without Mark Levin would be heart breaking.

Mark has opened my eyes to the bullshit DC is trying to bury us in. That's right I said it. :) He has given me a foundation to stand on and the courage to speak up. Thanks Mark.