How many Central American children have to die before the Democrats decide to secure the border?


Central American children are pawns in the Democratic Party’s pursuit of political advantage through an open Southern border.

Gilberto Ramos is just one of their most recent victims. 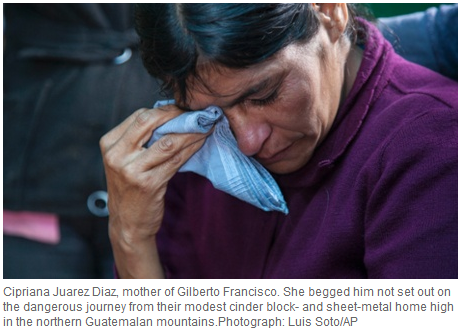 Gilberto Ramos wanted to leave his chilly mountain village for the United States to earn money to treat his mother's epilepsy. His mother begged him not to go. "The better treatment would have been if he stayed," Cipriana Juarez Diaz said in a tearful interview with the Associated Press on Tuesday. When he wouldn't relent, she draped him with a white rosary for safe passage. A month later, his decaying body was found in the Texas desert.

Gilberto, age 15, died a pawn in the Obama regime’s pursuit of his party’s comprehensive progressive agenda that aims to open the southern U.S. border to an unhindered influx of future Democrat voters.

The Obama regime’s official complicity in promoting the flow of unaccompanied, undocumented children entering the U.S. lacks the same degree of transparency associated with the civilian deaths in Mexico due to Eric Holder’s Fast & Furious gun-running, the White House’s involvement in the IRS Scandal, and the deaths of Americans in Benghazi.

None of the above is likely to ever be fully parsed.

But no one suggests the “border crisis” came as a surprise to the regime.

At the end of March, 2014, the U.S. Department of Health and Human Services Office of Refugee Resettlement predicted it, according to an on-line Arizona Republic article entitled “Border Patrol warns more kids will die in desert.”

Editorializing under the thin guise of reporting, Arizona Republic’s Linda Valdez began her article with this spin: “This summer may answer the burning question: Just how hard are the hearts of Republicans in the U.S. House?” And she closed with: “If summer produces the increase in child deaths that the Border Patrol fears, will Republicans in the U.S. House see the suffering? Will it soften their hearts?”

The “border crisis” was manufactured by the Obama regime to embarrass the Republican majority in the House of Representatives, and, by intent, it is victimizing other nations’ children to gain partisan political advantage in America.

That’s the hell of it in a nutshell.

On July 9, 2014, Reuters, under the headline “Mexican train derails, stranding 1,300 migrants headed toward U.S.,” reported that:


“A cargo train used by Mexicans and Central Americans to travel toward the U.S. border derailed in the southern Mexican state of Oaxaca on Wednesday, stranding about 1,300 migrants, emergency services said. Many of the migrants aboard were young people and nobody was injured when the train nicknamed "the Beast" came off the tracks, a spokesman for local emergency services said.”

But then using children as victims is not a new thing.

More casualties in the Democrats’ War on Children.

Jesus is reported to have said, “Let the little children come to me, and do not hinder them, for the kingdom of heaven belongs to such as these.”

The message from the Obama regime is, “Send your little children up through Mexico led by ruthless coyotes to be dropped into a desert, for the kingdom of progressive politics.”