THAT'S A RELIEF: "Ebola could easily arrive in the USA on board a plane, but wouldn't spread far, experts say"

And the quote doesn't come to us from some tabloid click-bait farm, it's actually from USA Today:

The growing Ebola outbreak in West Africa serves as a grim reminder that deadly viruses are only a plane ride away from the USA, health experts say.

The outbreak is the largest and deadliest on record, with more than 670 deaths and more than 1,200 infections in Guinea, Liberia and Sierra Leone, according to the Centers for Disease Control and Prevention. Fatality rates for Ebola have been as high as 90% in past outbreaks, according to the World Health Organization.

The virus — which has an incubation period of a few days to three weeks — could easily travel to the USA through infected travelers... 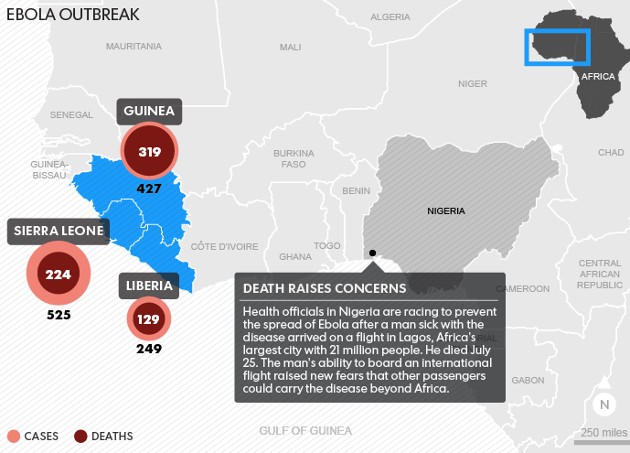 Yet while Ebola is a fearsome disease, the virus "would not pose a major public health risk" in the USA... That's because people need to be in intimate contact to spread the virus...

Ebola is actually much harder to spread than respiratory infections, such as influenza or measles. Those viruses pose a much greater threat on a plane or in any confined space, says Osterholm, who notes that people cannot spread the Ebola virus simply by sneezing or coughing.

Let's hope this crop of experts is a tad more accurate than the clan of scammers who tried to market global warming climate change climate disruption.

Well, maybe or maybe not.

If "intimate contact" between the infected and the non-infected is necessary, then why have so many doctors and nurses (most of whom I assume are treating Ebola victims while wearing medical space suits and should be following medical protocol re infectious diseases) become infected in this Ebola pandemic? What exactly does "intimate contact" entail? And how sure are these medical experts that this particular strain hasn't mutated into a more infectious disease?

Sounds more like a press release than a medical observation of the facts.