Seven Republican senators have now been linked to the racial attacks against conservative Chris McDaniel in Mississippi.

First, it shows that the following seven GOP senators gave a total of $160,000 to Thad Cochran's super PAC:

Second, it shows that the PAC then gave a similar amount to a liberal group to run racial attacks against Chris McDaniel. 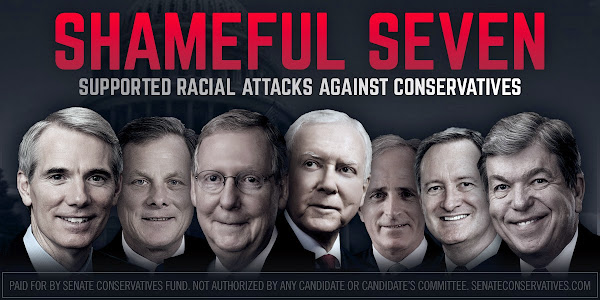 These senators fully funded ads that urged Democrats to “cross over and vote in the republican primary” and claimed that a McDaniel win would be a loss "for race relationships between blacks and whites."

They also helped pay for fliers that said, "The Tea Party Intends to Prevent You From Voting" and suggested McDaniel would roll back civil rights.

And perhaps worst of all, they helped pay thousand of dollars to Democratic activists to do so called "canvasing" to turn out votes for Cochran.

These seven Republican senators not only supported a 41-year incumbent who regularly votes with the Democrats, but they also funded a shadowy group to get Democrats to hijack the election.

How can these Republicans expect conservative voters to support them when they do such treacherous things to people in their own party?

These seven senators need to pay a heavy price for their actions. Here are several things you can do to hold them accountable:


Thank you for standing strong for freedom.

One of the Shameful Seven is from my state, and I voted for him last time around, but NEVER again.

republican scum that are secret Obama shoe lickers .. whenever these rinos appear on tv ,the mute button will engaged

Sadly, one of 'em is from the Old North State. I'd already written him off when he said that defunding Obamacare was the stupidest thing he'd ever heard of.

The article doesn't give any facts for the second claim of funding Democrats, or do I have to look for it myself? Less histrionics and more info might result in more fundraising.

One thing stands out with these reprobates, they still believe they can do things like this and get away with it. Still haven't learned that the Internet is a powerful tool to expose their under the table actions

But it was alright to pay someone to take pictures of a sick elderly lady and use them against her husband.