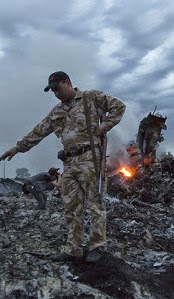 Congress: Use the Power of the Purse to Save the Border: Diana West
Border Flood is Causing a `Medical Breakdown': Bryan Preston
Illegal Aliens Accused of Threatening to Decapitate, Sell Honduran: Breitbart

DOJ: We Learned About Lois Lerner's "Lost" Emails Through The News: Katie Pavlich
Shocker: DOJ Says No Need For Special Prosecutor In IRS Scandal: WZ
Burn down a school? Retire and collect your full pension!: WyBlog

Study: People Who Worry About Global Warming Use the Most Electricity: RWN
Greenpeace Executive Commutes 250 Miles By Airplane To Work: SAB
Bummer: “Connecitcut” Will Be 10 Degrees Warmer By 2100: Cove

What Laura Ingraham doesn't get is that 11 Steps are a bridge too far for the Bimbeaux McLightworker Administration.

Can we get it down to maybe 2 Steps?

One would be better. Definitely.

So Mike's spouse reacts to the shoot down by enacting a ban on Russian arms in our Country (de facto gun control, and true to form leads from his ass on the meltdown of our southern border. Lest he forget in his indignation that he was running weapons from Libya and many of our weapons ended up in the hands of terrorists.
What would it be if in fact a stolen/smuggled US anti-aircraft missile brought down the Malaysian flight? If the Administration was true to form Rice would put on the kneepads and we'd never get to the bottom of the denials, stories and cover-ups.
Mike's spouse needs to go, and so does he.

This one reeks of phony, jumping, yammering, American PC outrage from a skinny little man and his tutor valjar.
It wasn't Russian policy or aggression that brought the flight down any more than it would be what someone else did with your stolen guns. You're not responsible for their misuse but the dude who pulled the trigger needs to be dealt with. where is our common sense?
Barry must be called to account for his litany of executive orders in the same way the Moose needs not use so much toilet paper in that poorly plumbed house.