Funny. Never heard about this in history class:

Since land was set aside by the United Nations to establish the State of Israel in 1948, a series of regional and ideological conflicts – and, indeed, often violent fighting – has broken out between Israel and the Arab States, collectively known as the Arab-Israeli conflict. The Six Day War of 1967 was one of them, and resulted in a decisive Israeli victory, gaining new boundaries for Israel. Syria and Egypt, two leading nations in the Arab world, desired their lost land, declaring afterward in a summit that there would be “no peace, no recognition, and no negotiation with Israel.” Egyptian President Anwar Sadat publicly decried the Jewish state, and announced that even a slight admission of defeat by Israel may alter the status-quo in the unstable region. It is then no surprise that Israel began a military buildup and attempted to heavily fortify its borders. 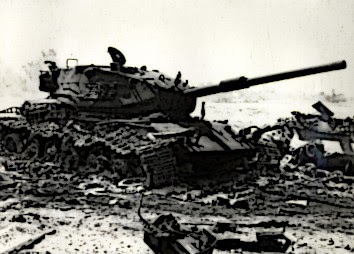 Then came the attacks of October 6, 1973 – a coordinated, surprise attack on Yom Kippur, the Holiest of days in the Jewish calendar. To demonstrate how much Israel was up against: 180 Israeli tanks faced over 1400 Syrian tanks; closer to the Suez Canal, a mere 436 Israeli infantry were poised to fight over 80,000 Egyptian soldiers – this even after Israel’s military buildup. The attacks by Egypt and Syria were backed by nine Arab states – as well as one non-Arab state: the Soviet Union.

Richard Nixon’s role, and that of those within his Administration, in the Yom Kippur War has been credited with literally saving Israel from an onslaught of potentially devastating attacks. The President recognized the threat that an Arab victory posed, the “threat of victory by Soviet arms,” according to author Conrad Black. The Soviet government was the Arab world’s chief supplier of munitions, and was strategically attempting to spread its influence throughout the region.

RN knew that the only way to end the crisis and push out the Communist influence was to provide American arms to the Israelis in order to defeat Russian arms in the hands of the Syrians and Egyptians. Both Secretary of State Henry Kissinger and the President wanted to conduct the airlift, but according to CIA Director Vernon Walters, “Nixon gave it the greater sense of urgency. He said, ‘You get the stuff to Israel. Now. Now.’” 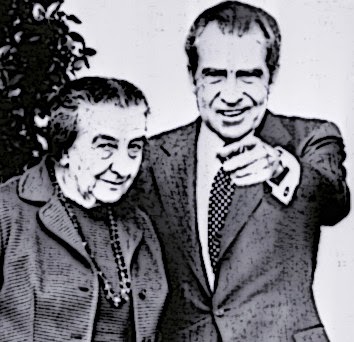 Things did not go particularly well for Israel over the next couple days, but as Israel started to push back the daily advances, the Nixon Administration initiated Operation Nickel Grass, an American airlift to replace all of Israel’s lost munitions. This was huge – planeload after planeload of supplies literally allowed munitions and materiel to seemingly re-spawn for the Israeli counter effort. 567 missions were flown throughout the airlift, dropping over 22,000 tons of supplies. An additional 90,000 tons of materiel were delivered by sea. According to Abraham Rabinovich, “while the American airlift of supplies did not immediately replace Israel’s losses in equipment, it did allow Israel to expend what it did have more freely.”

...To this day in Israel, Richard Nixon is regarded very highly. Prime Minister Golda Meir, with whom the President kept in frequent touch with throughout the ordeal, referred for the rest of her life to Richard Nixon as “my president,” and said, “For generations to come, all will be told of the miracle of the immense planes from the United States bringing in the materiel that meant life to our people.”

...Those were momentous events in world history,” noted historian Stephen Ambrose. “Had Nixon not acted so decisively, who can say what would have happened? The Arabs probably would have recovered at least some of the territory they had lost in 1967, perhaps all of it. They might have even destroyed Israel. But whatever the might-have-beens, there is no doubt that Nixon… made it possible for Israel to win, at some risk to his own reputation and at great risk to the American economy.

“He knew that his enemies… would never give him credit for saving Israel. He did it anyway.”

You may not have heard all the history about Nixon yet. Thanks to Nixon's right-hand man Roger Stone, all that is about to change. In his book "Nixon's Secrets" he tells all that Nixon personally revealed to him. That would include facts from before the break-in, immediately afterward and then other juicy tidbits Nixon shared with him after he left the White House:
http://www.barnesandnoble.com/w/nixons-secrets-roger-stone/1118070886?ean=9781629146034

Could the Israelis flip and ally with Putin? The Soviets backed the Israelis pre-1967, and right now Putin’s siding with Assad against the Islamists. Israel would be a game-changing ally for Russia in the Middle East, especially with all the traditional Arab powers looking shaky — not only in terms of military assets, but more significantly in terms of intelligence assets.