Even foreign media have noticed that our President has, uhm, checked out:

Consider this: In recent days, a) Malaysia Airlines Flight 17 was shot down, apparently by Russian separatists in Ukraine, b) In the Gaza strip, the numbers killed continued to mount as Israelis and Palestinians exchange rocket fire, c) a huge influx of children fleeing Central American poverty and gang warfare swamped America’s southern border, creating a humanitarian crisis.

And, oh yeah, d) Christians living in Mosul were given the choice to either convert to Islam or flee the area they have inhabited for nearly two thousand years.

You know what else has happened during this time? a) Obama played many rounds of golf, b) he attended numerous fund-raisers, c) he dined on barbecue in Texas and burgers in Delaware, and d) he almost appeared on the comedian Jimmy Kimmel’s late-night television show in Hollywood.

The subhead on the Telegraph's story is brutal: "The degree to which Barack Obama is now phoning it in – sleepwalking perfunctorily through his second term, amid golf rounds and dinner parties – is astonishing."

And when you've lost Dianne Feinstein: 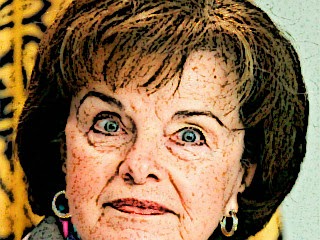 “This is a very hard time,” she said on MSNBC on Monday, referencing the ongoing civil war in Syria, the continued push by ISIS in Iraq, the state of Iranian nuclear negotiations, the Gaza–Israel conflict, and the dispute between Russia and Ukraine. “I’m not going to tell the president what to do, but I think the world would very much respect his increased attention on this matter, and I think there ought to be increased attention.”

Feinstein’s call for Obama to be more focused and attentive comes as he is ... on a three-day trip to the West Coast for Democratic fundraisers in Seattle, the Bay Area, and Los Angeles.

I repeat my call for Section 8 Housing for Illegal Aliens on Martha's Vineyard. Which would appear to be the only way to get Dear Leader to pay attention.

Oh, c'mon; he's only ever been a celebrity president anyway, sort of a royal figurehead if you will.