Depravity and Sickness at the United Nations


The UN Human Rights Council held a special session in Geneva on July 23, 2014 to declare effectively that Israelis do not have human rights. The vote was 29 in favor, 1 against and 17 abstentions. 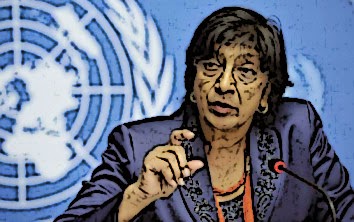 The Obama administration voted against – after joining and legitimizing the virulently anti-Jewish Council for the past five years, and now feigning disappointment for American cameras.

The Europeans abstained because they did not want to upset their violent Muslim minorities, and because their sordid past didn’t leave the resolution’s message too foreign in any case. A few cowardly countries that Israelis have magnanimously befriended over the years also abstained.

But the majority of the UN world cheered – literally. Speakers during the procession of hatemongers at the Council were greeted with applause.

As is their wont, CNN, the New York Times and company derived from this spectacle the lesson that Israel is pathetic, isolated and doomed.

But the real takeaway is the polar opposite.

Israel really is a light unto the nations.

Here is how it went down.

The “Human Rights” Council session on Gaza was presided over by President Baudelaire Ndong Ella of Gabon, a member of the Islamic bloc of states (OIC), and UN High Commissioner for Human Rights Navi Pillay.

Pillay retires in August after six years dedicated to the demonization of Israel. A native of Durban, South Africa, Pillay spent her time in office championing the racist anti-racism conference that took place in her hometown in 2001 (after Durban’s mayor requested that she resurrect the city’s good name). She choreographed the second and third UN Durban conferences in 2009 and 2011 that “reaffirmed” the Israel-is-racist canard.

Pillay also initiated, and subsequently became the lead spokesperson for, the 2009 slanderous UN Goldstone report. Though Goldstone himself later recanted the charge, the report accused Israel of deliberately targeting Palestinian civilians the last time Israel had the audacity to mount a sustained response to the Hamas killing machine in Gaza.

In short, Pillay was bent on leaving office with a bang. Along with Durban II and III, Goldstone I and II would be her anti-human rights legacy.

Pillay opened the Council session on July 23, 2014. For her, “suffering” was a description applicable only to Palestinians. She carefully presented the charge of “crimes against humanity” – knowing full well that the image projected was one of Israelis as the new Nazis. She simultaneously called for an investigation to discern the facts and recounted a list of supposed Israeli-driven horrors, like killing little children while their pious parents prepared for Muslim rituals. She summed up Israeli operations in Gaza as having “inflicted” “unimaginable death, destruction, terror and life-long consequences.”

The feeding frenzy that followed her at the UN’s highest human rights body was raw unadulterated antisemitism. It was a verbal blitz timed to coincide with the blitz of Hamas rocket attacks that Israelis were experiencing from the skies. The Council session revealed – for the umpteenth time – that these offensives are a continuation of the rejection of a Jewish state, period. Or in the words of Palestinian foreign minister Riyad Maliki himself at the Council, first came the “Israeli atrocities of 1948.” Maliki went on to charge Israel with having “exterminated” Palestinians. His language included: “the smell of death is pursuing Palestinian children because of Israel…who have transformed children into shreds…while they tried to escape the machinery of death.”

Over and over again the despicable antisemitic analogy of Israelis to Nazis was repeated, along with maniacal claims from a parade of human rights abusers. Algeria said “Gaza is a concentration camp.” Sudan said Israel had a “policy of ethnic cleansing and genocide.” Iran claimed Israel was engaged in “massacres and crimes against humanity.” Venezuela said “Israel seeks to exterminate the Palestinian people.” Tunisia said “Israel was born out of Jewish terrorism and is acting in Gaza like the Nazis.” And then there were charges of “barbaric, inhuman acts,” “heinous massacres,” and “crimes unparalleled in recent history.”

In the end, the Human Rights Council’s resolution “deplores” and “condemns in the strongest terms” Israel’s “grave,” “widespread, systematic, and gross” “violations of human rights.” The word “Hamas” is never mentioned.

And the UN launched what might be called Goldstone II – another so-called “human rights” investigation into “violations of law in the occupied Palestinian territory” – not Israeli territory of course.

On top of that, Goldstone I is still alive and kicking. It generates annual reports by the UN human rights commissioner, produced as recently as January 13, 2014. And it spawns annual resolutions by the Human Rights Council calling for its implementation, adopted as recently as March 28, 2014.

Before the vote on the resolution, the UN staff announced that the initial price tag for Goldstone II will be $2,321,500 – twenty-two percent of which will come from the American taxpayer, thanks to Obama’s ownership of the Council. Just on June 19, 2014, Keith Harper, U.S. Ambassador to the Council gushed: “The Obama Administration decided to seek membership because the United States believes the Council can make a difference. And on July 3, 2014 he claimed: “the most powerful tool we wield at the Human Rights Council is information – the ability to bring into stark focus the realities of injustice and abuse in the world…[T]he United Nations Human Rights Council is making a difference.”

What difference is it making?

There have been twice as many urgent debates and special sessions of the Council on Israel in its entire eight-year lifespan than there have been on Syria with upwards of 200,000 dead.

There has never been a single special session on a place like Iran or China or Russia.

One-third of all the resolutions and decisions critical of a single state – for all 193 UN members – have been directed at Israel alone.

There has never been a single resolution on a place like Saudi Arabia or Cuba.

We are witnessing a terrible acquiescence to the suffering of the nation of Israel, a nation dedicated to life, freedom and equality. A nation committed to profound spirituality and compassion for all humankind.

Abandon Israel at the peril of all human decency.

The UN is lost. It is not too late for America.

It has been opined that Obama will seek a position at the UN when he leaves office (the sooner the better). The headline here, "Depravity and Sickness at the United Nations" - he will fit right in.