Obama Will Be Laughing All the Way to the Bank When Our Cities Burn as the Direct Result of His Policies... 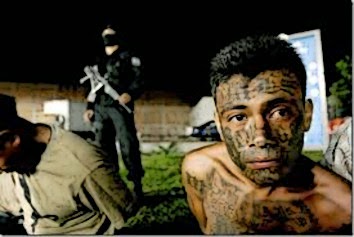 Did you know that the number of illegal immigrants that enter Texas each week is greater than the number of babies being born to citizens of that state? The mainstream media is shining the spotlight very brightly on all of the children that are coming over, and there is a reason for that. They are trying to tug on our heartstrings. But there is another part of the story that you aren't hearing much about. By refusing to protect our borders, Barack Obama has allowed hundreds of thousands of gang members to illegally enter the United States and settle in our major cities. In many communities, gang activity is already wildly out of control, and someday our cities will burn because of the foolishness of the federal government.

Hours before Texas Gov. Rick Perry announced he would send National Guard troops to the border, Texas state Senator Dan Patrick said there are at least 100,000 illegal immigrant gang members in the state.

On Monday's The Laura Ingraham Show, Patrick, who is also the Republican candidate for lieutenant governor, said from 2008 to 2012, 143,000 illegal immigrant criminals were arrested and jailed in Texas. He said these were "hardened criminals, gang members, and other criminals that we identified as being in Texas illegally."

Why won't Obama do anything to stop this madness?

There are at least 70,000 gang members living in Obama's home city of Chicago. Other estimates put that number closer to 100,000. But everyone agrees that it is a number that is growing every day.

So it shouldn't surprise any of us that at least 40 people were shot in Chicago over one recent July weekend.

I just fear for what Chicago will look like when things get really bad in this country. Many of our major cities are literally being transformed into tinderboxes that could erupt in flames at any time.

Overall, there are now approximately 1.4 million gang members living in the United States according to the FBI. But that number is actually a few years old now, so the true number is undoubtedly far higher at this point.

In addition, we know that illegal immigrants make up approximately 30 percent of the total population in our federal, state and local prisons.

And yet we refuse to stop more waves of illegal immigrants from coming in.

Are we willingly committing national suicide?

Just the other day, I noted that Honduras has the highest murder rate on the entire planet and that the Mexican drug war has claimed more than 120,000 lives since 2006.

That is what is coming here if we allow this insanity to continue.

Unfortunately, political correctness reigns in America today. Under current policies, our border agents are not even turning away minors with known gang affiliations that have gang tattoos all over them. Just check out the following excerpt from a recent National Review article...

Border Patrol officials struggling to keep up with the increasing number of minors illegally crossing the Mexican border are not turning away persons with known gang affiliations. Chris Cabrera, vice president of the National Border Patrol Council Local 3307 in the Rio Grande Valley, explained that a Border Patrol agent he represents helped reunite a teenage gang member with his family in the United States. Cabrera notes the young member of Mara Salvatrucha (MS-13), a transnational criminal gang, had no criminal record in the U.S., but asks, “If he’s a confirmed gang member in his own country, why are we letting him in here?”

Art Del Cueto, president of the National Border Patrol Council Local 2544 in Tucson, says agents who recognize the gang-affiliated tattoos of minors crossing the border must treat them the same as anybody else. He says these people are afforded the same rights provided to anyone crossing the border.

And according to the Border Patrol, some of these "processing centers" that we have seen pictures of lately are actually being used by the gangs to recruit more gang members...

According to Border Patrol sources, violent MS-13 gang members are using the Nogales processing center in Arizona as a recruitment hub and as a transfer point for gang members to get into the United States.

The Red Cross has set up phone banks inside the processing center so unaccompanied minors can make phone calls to family members inside the United States and back home in Central America. According to sources, those phones are also being used by MS-13 members to communicate with gang members already in the United States and operating in cities like Atlanta, New York and Chicago. Further, many teenaged males inside the facility have approached Border Patrol agents and have said gang members have tried to recruit them from shared cells. According to the FBI, MS-13 regularly targets middle and high school students for recruitment.

“The National Border Patrol Council believes there to be serious security issues at the Nogales Processing Center. Agents’ hands are tied due to the policies governing the care and lodging of juveniles and this has allowed gang recruitment and activity to flourish amongst those being detained,” vice president of the National Border Patrol Council Shawn Moran tells Townhall. “Customs and Border Protection needs to do more to ensure that gang members that are in custody at the NPC are identified, prosecuted, and prohibited from benefiting from this crisis.”

Barack Obama can see all of this happening and yet he refuses to secure our borders.

What in the world is he thinking?

Its "fundamentally changing America" is what is underway. Cloven Given Fabien deception and madness.
The purpose is to keep America from voting its way out of the agenda of tyranny the psychopaths running things hope to impose upon our Liberty.

Gun control, silly. Gangs will use guns, therefore, in libs' minds, this will be a great excuse for gun control. Don't think this isn't planned. Of course it is. Just wait and see....

I see martial law being declared in 2016 to deal with the 'inner city violence' issue. Would obama suspend the elections to deal with the crisis he manufactured? I don't know why he would want to remain POTUS since he's obviously bored with all the little details like international turmoil, economic downturns, crime, etc. I'm guessing the purpose will be to keep democrats in power.
I hate to sound like such a nutjob conspiracy theorist, but I'm running out of other ways to figure out why he does what he does.

Seems to me that Obama is making sure that the white race is outnumbered. He and his wife are getting back at the Country they both hate...the USA

I wonder how this article would read if violent crime was at a 44 year high instead of a 44 year low?

Would there be any difference?