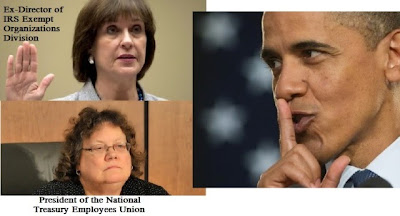 In a notable feat of investigative journalism, American Spectator reporter Jeffrey Lord exposed what appears to be an unholy alliance among the White House, Democrat members of Congress and the thousands of IRS employees, who are members of the far-left, anti-Tea Party National Treasury Employees Union (NTEU).

NTEU's Kelley has a long history of interaction with the Obama Administration, first meeting in the White House on January 30, 2008, a mere ten days after his first inauguration, which she described:

"We are looking for a return to what we used to call partnership. I don't really care what it's called. For me, it's about collaboration."

And all of it, apparently, was at least condoned if not directed from the White House.

Lord, who says that Obama is being re-cast from America's first black president to a black Nixon, posed some important questions about the White House connection to the IRS scandal:

I believe Lois Lerner supervised illegal activities by the IRS, facilitated by NTEU boss Colleen Kelley and initiated by the White House and the Democratic Party.

The IRS scandal also highlights the potential for corruption when public-sector unions and politicians "collaborate" in a pursuit of personal power and profit.

Time for RICO act. A huge criminal conspiracy I bet, between members of Congress, the administration, Treasury, IRS, DOJ, FBI, DHS, EPA, ATF and the unions representing above employees.

A few moles could ferret out the true corruption and coercion of Tea Party groups. But the damage unveiled would be so huge, I'm sure it will be hushed up and nothing to see here.

Between the weaponizing of the IRS, the installation of the EPA as the Committee for 5 Year Industrial Planning, and the current invasion of our southern border, I'm beginning to fear that this is going to end up being settled in the street.

Government officials would push themselves in front of the news cameras to show the public how vigorously they are enforcing conflict of interest rules they impose on private business. But as with all things in liberal big government, these same officials give themselves a pass.

Obama a useless ,clueless president .. will he resign to save democrats in November

public unions are a menace, and should not be legal.

Okay, I don't know whether this is a Conspiracy Theory or getting down to the dirty little secret Los Lerner and her cohorts are trying so desperately to hide. Why would the union that supported so many anti-Tea Party candidates have anything to do with having IRS employees deny conservative groups from getting tax exemptions.

Uh, and is this an effort to shift the blame?

It should be illegal for the NTEU to make political contributions to candidates. It just invites corruption from the people who collect taxes and audit taxpayers.