When US President Barack Obama phoned Prime Minister Binyamin Netanyahu on Sunday night, in the middle of a security cabinet meeting, he ended any remaining doubt regarding his policy toward Israel and Hamas.

Obama called Netanyahu while the premier was conferring with his senior ministers about how to proceed in Gaza. Some ministers counseled that Israel should continue to limit our forces to specific pinpoint operations aimed at destroying the tunnels of death that Hamas has dug throughout Gaza and into Israeli territory.

Others argued that the only way to truly destroy the tunnels, and keep them destroyed, is for Israel to retake control over the Gaza Strip. 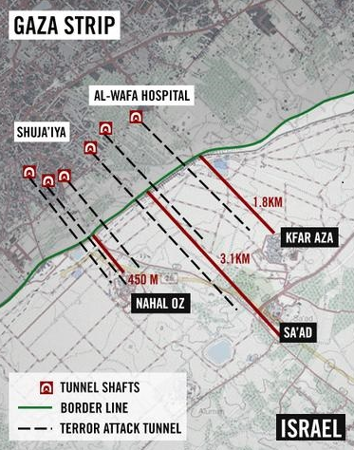 No ministers were recommending that Israel end its operations in Gaza completely. The longer our soldiers fight, the more we learn about the vast dimensions of the Hamas’s terror arsenal, and about the Muslim Brotherhood group’s plans and strategy for using it to destabilize, demoralize and ultimately destroy Israeli society.

The IDF’s discovery of Hamas’s Rosh Hashana plot was the last straw for any Israeli leftists still harboring fantasies about picking up our marbles and going home. Hamas’s plan to use its tunnels to send hundreds of terrorists into multiple Israeli border communities simultaneously and carry out a massacre of unprecedented scope, replete with the abduction of hostages to Gaza, was the rude awakening the Left had avoided since it pushed for Israel’s 2005 withdrawal from Gaza.

In other words, in their discussion Sunday night, Netanyahu and his ministers were without illusions about the gravity of the situation and the imperative of winning – however defined.

But then the telephone rang. And Obama told Netanyahu that Israel must lose. He wants an unconditional “humanitarian” cease-fire that will lead to a permanent one.

And he wants it now.

And by the way, the eventual terms of that cease-fire must include opening Hamas-controlled Gaza’s borders with Egypt and Israel and ending Israel’s maritime blockade of the Gaza coast. That is, the cease-fire must allow Hamas to rebuild its arsenal of death and destruction quickly, with US political and financial support.

Until Obama made the call, there was lingering doubt among some Israelis regarding his intentions. Some thought that US Secretary of State John Kerry might have been acting of his own accord last Friday night when he tried to force Israel to accept Hamas’s cease-fire terms.

But then Obama made his phone call. And all doubts were dispelled.

Kerry is just a loyal steward of Obama’s foreign policy.

Obama is siding with Hamas, and its Muslim Brotherhood patrons in Qatar and Turkey, against Israel, and its Sunni Arab supporters – Egypt, Saudi Arabia, Jordan and the United Arab Emirates.

It is Obama who demands that Hamas have open borders so it can resupply, and receive billions of dollars – starting with an immediate cash injection of $47 million from US taxpayers – so it can pay North Korea for more missiles and import building materials to reconstruct its tunnels.

The fact that the US’s current preference for genocidal, Jew-hating jihadists over the only liberal, pro-American, stable US ally in the Middle East is a White House position, rather than that of a rogue Secretary of State was actually exposed even before Obama’s phone call.

Sunday CNN’s Candy Crowley interviewed Deputy National Security Adviser Ben Rhodes. She asked him what the administration thinks Israel can do to prevent civilians from being killed in Gaza beyond what it is already doing. Rhodes replied, “I think you can always do more.”

The discovery that the Obama administration is entirely in Hamas’s corner hit all of Israel hard. But it hit the Left the hardest. Few on the Right, which recognized Obama’s hostility from the outset of his presidency, were surprised.

As for political leaders, the government cannot risk giving the administration justification for its anti-Israel policies, so senior ministers have all said nothing.

Consequently, the harshest criticisms of the administration’s pro-Hamas position were heard from quarters where rarely a peep of criticism for Obama has been heard.

Haaretz, the far-left broadsheet that has seldom taken issue with even the harshest rejections of Israel’s rights, went bananas after its reporter Barak Ravid received the details of Kerry’s cease-fire agreement. As Ravid put it, Kerry’s document, “might as well have been penned by Khaled Mashaal. It was everything Hamas could have hoped for.”

Ravid continued, “What Kerry’s draft spells for the internal Palestinian political arena is even direr: It crowns Hamas and issues Palestinian President Mahmoud Abbas with a death warrant.”

And that is really the crux of the issue. The crowd at Haaretz is far more wedded to the PLO and Mahmoud Abbas than it is to the government of Israel. And the administration’s support for Hamas exposed the PLO as an irrelevance.

As the paper’s Amos Harel wrote the next day, Kerry’s pro-Hamas behavior convinced the Egyptians and other actors that the administration is “continuing its secret love affairs with the Muslim Brotherhood in the region.”

The Left understands that the administration’s behavior has destroyed it.

Leftists can no longer say that Israeli territorial withdrawals will win it international support.

They can no longer say that the PLO is the answer.

The Israeli Left has been Obama’s ace in the hole since he first ran for office, fresh from the pews in Jeremiah Wright’s anti-Semitic church. They were the grease in the wheels that legitimized the administration’s anti-Israel pressure group J Street. They were the ones who could be counted on to tell the US media and the American Jews that Netanyahu is to blame for Obama’s hostility.

Yet, rather than backtrack, and try to save the Israeli Left, the administration doubled down on Monday, releasing a series of statements condemning the Israeli media’s condemnations of Kerry’s pro-Hamas position.

By Monday afternoon, the administration went so far as to say that by criticizing Kerry, Israel’s media were endangering their country’s alliance with the US.

In other words, through his actions, Obama demonstrated that his “love affairs with the Muslim Brotherhood in the region,” are so central to his foreign policy calculations that he is willing to destroy the Israeli Left in order to strengthen the Brotherhood.

And this leads us to the larger point about Obama’s foreign policy, which his Sunday night telephone call to Netanyahu revealed. As rattled as Israelis are over Obama’s decision to support Hamas against Israel, Netanyahu made clear in his remarks Monday night that Israel has no choice but to keep fighting until we defeat this barbaric enemy.

Netanyahu didn’t mention Obama, but it was obvious that he was respectfully refusing to hand Israel’s head on a platter to Hamas’s friend in the White House.

And while it is hard for Israel to ignore Obama, it is impossible for Americans to ignore him. He runs their foreign policy.

Americans are the ones who need to be most alarmed by what Obama’s actions on behalf of Hamas reveal about the general direction of American Middle East policy under his leadership.

For the past five years, Americans from all quarters have concluded that the manifold failures of Obama’s Middle East policies – from Iraq to Iran, Libya, Afghanistan, Egypt, Syria, Israel, the Palestinian Authority and beyond – owe to a combination of Obama’s personal disinterest in foreign affairs and his presumed preference for withdrawal and isolationism over engagement.

Obama himself has often encouraged this perception with his endless golf games and his talk about fighting “the war at home.”

Obama’s open, public engagement in Hamas’s war against Israel shows that the popular assessment is wrong.

Obama is as involved in the Middle East as all of his immediate predecessors were. He is personally leading US policy on every front. Kerry is not an independent actor.

The problem is that in every war, in every conflict and in every contest of wills that has occurred in the Middle East since Obama took office, he has sided with Iran and the Muslim Brotherhood, against America’s allies.

Under Obama, America has switched sides.

We can start by apologizing to Benedict Arnold, Aldrich Ames, Fritz Julius Kuhn, and Martin James Monti, with a hat tip to Aaron Burr.

Obama is NOT speaking for me, or millions of other Americans. I believe the people of Israel know that the vast majority of the American people are on their side.

If Israel is stunned it's only because they must have the same kind of lying media we have.