Trevor Loudon’s The Enemies Within: Communists, Socialists and Progressives in the US Congress is to be turned into a “game changing” movie. 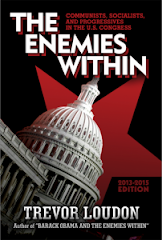 Timed for release in August 2015, “The Enemies Within” will be like no other film ever released in America.

Production standards will be Hollywood quality.

Guiding values, however, will be 100% American.

The Enemies Within will name names and go where no one has gone in modern times in its quest to awaken Americans to the enemies within their own government.

Go here to help us to fund and make this movie.

Thanks for the link, Doug. This looks like a worthy cause, so I threw the pittance I could afford at it.

I contributed. This is a movie that needs to be made therefore it must be made. I had the pleasure of interacting with Trevor during his speaking tour of North Carolina earlier this year (arranged three events for him). A knowledge of wealth and all around great guy. Please contribute to this worthy venture as it will shake the Democratic Party to it's core.