WELL, THIS IS A BUMMER FOR THE GUN-BAN CROWD: Murder Rates Drop as Concealed Carry Increases

The Crime Prevention Research Center has released a comprehensive analysis [PDF] of the statistical linkage between murder rates and the dramatic proliferation of concealed-carry permits. The conclusions, it goes without saying, are decidedly negative for the radical, anti-American gun-ban crowd.

...Between 2007 and the preliminary estimates for 2013, murder rates have fallen from 5.6 to 4.4 per 100,000 – a 22 percent drop in the murder rate at the same time that the percentage of the adult population with permits soared by 130 percent. Overall
violent crime also fell by 22 percent over that period of time...

...deterrence isn’t just a matter of whether states have adopted right-to-carry laws. It very much depends on the percentage of the population with permits. 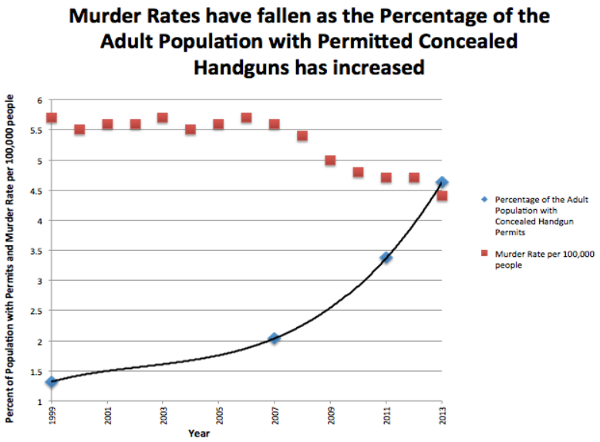 Sorry, but this is a STUPID visualization.
1) The upward trend is entirely fabricated. Four data points a trend does not make. In fact, the gaps in reporting make this highly suspect. Why are their so few points on the handgun permit percentage?
2) Whether recorded or not, it is almost guaranteed there are spikes and dips between these missing points in permit ownership.

I'm not pro gun or anti gun. It just so happens that this is my job.

I took real data and was able to re-create their graph along with graphs with some context.