It's good to see the administration being extra careful with your tax dollars. 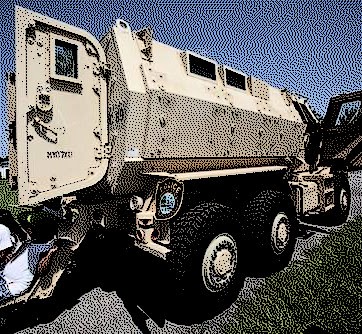 The Ocala Police Department just got a good deal on a low-mileage military surplus Mine Resistant Ambush Protected (MRAP) vehicle known as a Caiman.

The heavily armored behemoth, which weighs 72,000 pounds or about the equal of 18 Crown Victoria squad cars, cost the Department of Defense about $733,000, according to a list of DoD acquisitions.

OPD got it for a $2,000 governmental transfer fee.

OPD public information office Sgt. Angy Scroble said the vehicle was paid for with money “from our Federal Confiscation Trust Fund that comes from seizures made through cases that go federal, primarily cases from the Unified Drug Enforcement Strike Team.”

The report indicates that over 600 MRAPs have been sold to police departments around the country. With a fuel efficiency rating of 4 MPG, I would have thought the radical left would oppose these vehicles based upon carbon footprint alone.

But for the Left, as you know, the ends always justify the means.

to be used for warrants for crimes such as credit card fraud, domestic abuse and parking tickets.

I can't wait to see what happens to people when their library books are overdue or lost.