CONGRATULATIONS TO THE EPA: Now Acting as All Three Branches of Government

Big Government: The EPA is now claiming the authority to bypass courts and, on its own, garnish the paychecks and attach the assets of those it accuses of violating its rules. And, as with the IRS, its hard drives also crash. 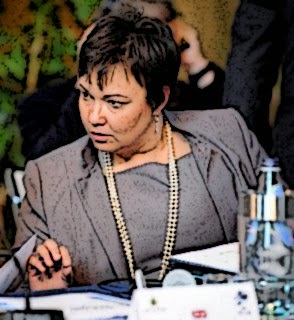 The Environmental Protection Agency's insatiable lust for power has now gone beyond being the pen and the phone for President Obama's climate change, bypassing both the Constitution and the Congress in enacting rules and regulations that the American people and their representatives did not enact or even support.

Through an announcement in the Federal Register, the agency is claiming that existing federal law allows it "to garnish non-Federal wages to collect delinquent non-tax debts owed the United States without first obtaining a court order." It claims such authority under the Debt Collection Improvement Act of 1996.

These non-tax debts are fines and penalties that the EPA has levied against alleged polluters who often are innocent — farmers, for example, making common-sense decisions in running their daily lives and businesses, who discover a ditch that they dug is now considered a wetland because rainwater occasionally fills it.

"The EPA has a history of overreaching its authority. It seems like once again the EPA is trying to take power it doesn't have away from American citizens," Sen. John Barrasso, Wyoming Republican, said when he learned of the EPA's wage-garnishment scheme, according to the Washington Times.

The EPA authoritarian edicts include recently slapping a $75,000 a day — yes, a day — fine on Wyoming homeowner Andy Johnson for building a pond on his rural property to provide water for his cattle where the Six Mile Creek runs across his land.

The EPA, our environmental judge, jury and enforcer, declared that the Johnson family was in violation of the Clean Water Act. The EPA charged the Johnsons with "the discharge of pollutants (i.e., dredged or fill material) into the waters of the United States" for building a dam without getting a permit from the Army Corps of Engineers.

According to the EPA, Johnson needed a permit not just from the state of Wyoming, which he had, but also from the Corps of Engineers because Six Mile Creek runs into Black Forks River, which runs into the Green River — a "navigable, interstate water of the United States."

By that definition, average Americans could be fined for washing their cars in their driveways.

EPA agents recently descended on a chicken farm owned by Lois Alt in Old Fields, W. Va. They claimed the chicken doo produced by her hens would be swept away during "rain events" hundreds of yards — all uphill, by the way — to a tiny creek called Mudlick Run, which the EPA labeled "a water of the U.S."

It didn't matter, as Alt pointed out, that not only does water not run uphill, but her chickens were housed in an indoor facility unaffected by "rain events."

Under the threat of $37,500 in fines per day, she was ordered to submit to the EPA's authority.

This is the current dilemma faced by American citizens. Obey the EPA's edicts or fight them in court, bankrupting yourself in the process even if you win.

Now the EPA wants to bypass the courts as an unnecessary infringement on its power. Who needs justice?

Interestingly, when the House Oversight committee tried to get emails from the EPA concerning its decision to shut down the giant copper and gold Pebble Mine project in Alaska, EPA Administrator Gina McCarthy claimed problems because a former employee's hard drive had crashed.

"There are some gaps, but we have submitted significant amounts," McCarthy said. Sound familiar?

Can congress not de-fund the EPA?

If they had the guts to not fund it, yes, they could. But - they have to have the political will and compassion for America and Americans. Those concepts seem to be a problem for them. Those and testicular fortitude.

What is the point of the three branches of government as checks and balances if one branch is headed by the likes of John Boehner?

This is why electing a corrupt, gutless, talentless, backstabbing drunk like John Boehner as GOP House Squeaker is much more dangerous to our nation then these psychos infesting the EPA.

Forget impeaching Obama for the moment. Concentrating on removing Boehner will do far, far more good.

Hilarious Video:
FIFA World Cup - Germany vs. Brazil - This Is What Happened - LOL!

Individuals within the government who abuse their authority such as is obvious in the cases stated in the article should be permitted to be sued as individuals.

The EPA needs to be eliminated as a Federal agency. ts employees are all radicals who should be dismissed.

What I would like to know is why would the editor of this blog use a picture (and a poor one at that) of and EPA administrator (Lisa Jackson) Who resigned almost a year and a half ago. Why not use the picture of current administrator McCarthy? Makes no sense.