Gee, this comes as quite the surprise.

Muslims have the most faith in President Obama’s administration.

Among religious groups in the U.S., followers of Islam were overwhelmingly the most approving of the President (72%), according to the results of a Gallup poll released Friday. 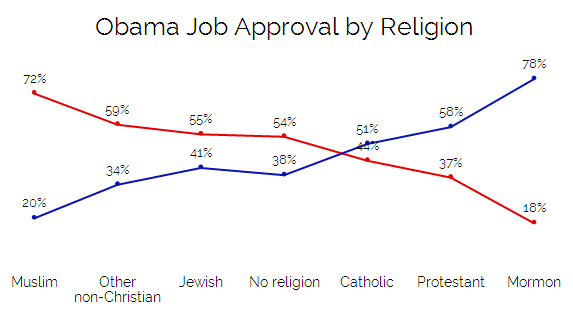 Mormons showed the lowest level of satisfaction with Obama (78% disapprove)...

Protestants and Catholics were also among the three groups most dissatisfied with the President’s performance, likely due to his administration’s tense rapport with faith-based organizations seeking religious exemptions from the contraception mandate in the Affordable Care Act.

Conservative critics of Obama have long declared him the “first Muslim President,” though Obama has professed he is a Christian.

In his 2006 book The Audacity of Hope, Barack Obama said, “I will stand with the Muslims should the political winds shift in an ugly direction.” In 2012, he reiterated his resolve to have the backs of Muslims by saying during a speech before the United Nations, “The future must not belong to those who slander the prophet of Islam.” He has sent billions of taxpayer dollars to the Muslim Brotherhood. He has released five of the Taliban’s greatest leaders in exchange for an Army deserter. So, it should come as no big surprise which religious group backs Obama by 72%.

Something to bear in mind as well is that the Protestant figure presumably includes the majority of African-Americans. His number among white Protestants is likely dramatically lower.

The followup survey would be to poll Muslims and ask them what Obama should be doing or not doing to improve his standing with them. That would be revelatory.