Illegal Immigration: Texas Gov. Rick Perry states the obvious when he suggests that the flood of alien children coming to the U.S. from Latin America just might be a result of "ulterior motives" on the part of President Obama. 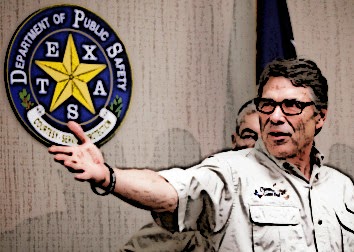 Obama is like an arsonist who sets fires to help rescue people from burning buildings. He's asked Congress for $2 billion to deal with a child refugee crisis of his own making, money that could have gone to seal the border instead of having Border Patrol agents acting as glorified baby-sitters by cooking, cleaning and even doing laundry.

A little-noted University of Texas, El Paso study, dated March 20 and titled "Unaccompanied Alien Children (UAC) Project," found that "the biggest issue with UACs is the high maintenance that is associated with caring, feeding and clothing them." These tasks have fallen to the Border Patrol, the guardian of our borders.

It has also fallen to states like Texas, whose governor, Rick Perry, said during a U.S. House field hearing last Thursday that the feds need to reimburse Texas $500 million that the state has spent trying to pick up the federal slack in securing the border.

"We have been fulfilling a federal responsibility," Perry told the panel. "The hardworking people of the state of Texas shouldn't be shouldering that cost."

Perry also told ABC's "This Week" on Sunday, "I have to believe that when you don't respond in any way that you are either inept or you have some ulterior motive."

As we've noted, Hondurans, Salvadorans and Guatemalans make up about 75% of the illegals caught in South Texas. Their long journey indicates organized human trafficking and child abuse on a vast scale.

This human flood is based on the expectation that once these unaccompanied children make it to the U.S., media coverage will ensure they won't be sent back.

Perry is right. At a recent House Homeland Security Committee hearing, Republicans cited three causes for the influx: President Obama's executive actions like the Deferred Action for Childhood Arrivals program, lax enforcement and talk by both parties of immigration legislation indistinguishable from amnesty.

As Committee Chairman Michael McCaul, R-Texas, noted, "newspapers in El Salvador and Honduras seem to be encouraging youth to head to the United States based on these policies. And recent internal DHS surveys of these children reveal that more than 70% believe they are going to stay in the country."

Henry Cuellar, a Democrat who represents the border city of Laredo, told CNN's "State of the Union" on Sunday, "They should have seen this coming a long time ago . . . because we saw those numbers increasing."

Just as he's done in the past in crises like Benghazi, the president will visit Texas for three fundraisers this week as he ignores the crisis he encouraged.

He will not sit down with Perry or visit the makeshift immigrant processing center at Lackland Air Force Base in San Antonio, where doctors and nurses have had their cellphones confiscated and been threatened with arrest if they tell the true story.

Why should he bother? After all, the fundamental transformation of America is going according to plan.