Ronald Kessler has written a series of great books on the federal government, but his latest may be the capper.

Bill Clinton reportedly has a buxom blond mistress who visits so often when Hillary Clinton isn’t home in Chappaqua that the former president’s Secret Service detail have given her an unofficial code name: Energizer. 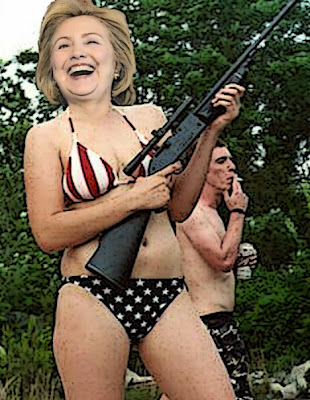 ...Kessler quotes a supervisor informing a new agent: “You don’t stop her, you don’t approach her, you just let her go in.”

Energizer, who is described as charming and friendly, sometimes brought cookies to the agents... One told Kessler: “It was a warm day, and she was wearing a low-cut tank top, and as she leaned over, her breasts were very exposed. They appeared to be very perky and very new and full … There was no doubt in my mind they were enhanced.”

...But once, the warning came late. “The agents had to scramble to get Energizer out of there so there wasn’t some kind of big confrontation.”

Kessler also reveals that Hillary is routinely rude to the agents who are sworn to take a bullet for her.
“Because she is so nasty to agents and hostile to law enforcement officers and military officers in general, agents consider being assigned to her detail a form of punishment,” Kessler wrote.

Our summer intern @BiffSpackle claims the above photo is the only known image of "Energizer", though we have reasons to doubt its authenticity.

Who is the guy in the background of the photograph puffing on a cigarette(?) and clutching a beer(?)?

Brother of the Energizer?

ya had me at buxom.