The Department of Homeland Security (DHS) is allowing illegal immigrants go around airport security to catch planes without a photo identification required of all other passengers, a high-level DHS source tells Judicial Watch. 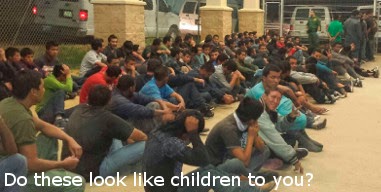 It appears to be part of an Obama administration plan to expedite the transfer of tens of thousands of Unaccompanied Alien Children (UAC)—mostly from Central America—that have entered the country through Mexico in the last few months. They are mostly coming in through the Rio Grande Valley in Texas and authorities there are incredibly overwhelmed by the sudden influx.

To ease the load, the Obama administration is transferring the UACs—more than 53,000 by the government’s count—to other parts of the country, including Florida, Nebraska and Massachusetts. Apparently a large number of UACs are being transported to their new destination on airplanes. Most don’t have a valid identification and are being allowed to board aircrafts with a slip of paper, JW’s Homeland Security source says.

Specifically, JW’s government source reveals that the Transportation Security Administration (TSA) is letting the illegal aliens surpass security at the El Paso airport in Texas. “They are catching airplanes at EP Airport, TSA is letting them go around security,” the DHS official confirms. “No picture ID, just a slip of paper.” This indicates that the passengers’ true identity has not been clearly established. It’s not unreasonable to conclude this could present a national security threat.

In the meantime, American citizens and legal residents must present a valid photo ID, provided by a certified government agency, before setting foot on a plane at any airport in the United States. The TSA, the famously inept agency created to protect the nation’s transportation system (mainly airports), after the 9/11 terrorist attacks, also makes law-abiding passengers take off their shoes, jackets and empty their pockets. We have come to accept this as a necessary national security measure.

Exempting illegal immigrants whose true identities are unknown to federal authorities seems irrational to say the least. In the last few weeks JW has reported, based on information provided by inside government sources, some of the desperate measures taken by the administration as it tries to cope with the barrage of UACs. From the start the influx created an out-of-control disaster with jam-packed holding centers, rampant diseases and sexually active teenagers at a Nogales facility, according to JW’s sources.

Military bases—including Ft. Sill in Oklahoma, Lackland Air Force Base in San Antonio and the Ventura County Naval Base in Southern California—across the country are being used as makeshift shelters and infectious diseases largely eradicated in this country are spreading like wildfire. This includes swine flu, dengue fever Ebola virus and tuberculosis, according to a U.S. Congressman who is also a medical doctor. JW obtained a letter that the lawmaker, Phil Gingrey of Georgia, wrote to the director of the Centers for Disease Control and Prevention (CDC) outlining the “severe and dangerous” crisis and demanding information on how the agency is handling the situation.

You can support the important work of JudicialWatch by clicking here.