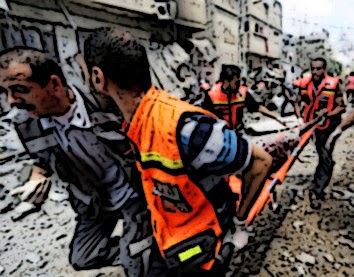 1. Iran loses one of its tentacles it meant to use to strangle Israel.

2. Having had one tentacle amputated in Gaza, Iran is loathe to lose the other one in southern Lebanon.

3. Talk about "isolation." A new calculus takes hold in Judea and Samaria. Fatah, the PA and Abbas know they're living from day to day - by the good graces of the IDF.

4. With the pressure relaxed on those fronts, Israel dusts off its plans to destroy Iran's nuclear infrastructure.

5. Having successfully defied Obama and his anti-Zionist cats-paws, Israel still has to respect the lame-duck snake, but can do so with greater confidence.

6. Any mention of returning to the "peace process" becomes the punch line to thousands of bad jokes. Even un-Jew Jon Stewart gets into the act.

7. The Arab World reads Israel's message loud and clear. Your region has a new boss and he is Jewish. Get used to it.

8. The Israeli Left and the anti-Zionist Left in general suffer a devastating body blow. Thomas Friedman goes back to writing about climate change, Peter Beinart gives a lecture to an empty auditorium, and Haaretz is sold to The Onion.

9. J Street, the New Israel Fund, B'Tselem et alia, are booted out of the "big tent" and told they will never march in NYC's Israel Day Parade again. At the same time, Peter Gelb of the Metropolitan Opera rewrites The Death of Klinghoffer and gives it a happy ending. Klinghoffer takes out an Uzi and kills all the Muslim bastards before they kill him. All performances are sold out even though the Times pans it.

10. George Soros dies in his sleep from complications of self-hatred.