It now appears certain that someone in Hillary Clinton's inner circle copied Top Secret information from a SCIF (Secure Compartmented Information Facility) to an unclassified email system, thereby committing multiple felonies. Each such instance is punishable by up to 10 years in prison.

The FBI is so certain that this occurred that it has seized four (count 'em: four) State Department servers in order to forensically determine who perpetrated these crimes. 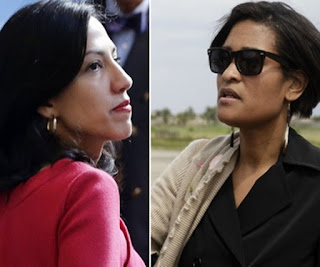 The FBI has seized four State Department computer servers as part of its probe into how classified information was compromised on former Secretary of State Hillary Clinton’s private email system ... They are being checked by technical forensic analysts charged with determining how Top Secret material was sent to Clinton’s private email by State Department aides during her tenure as secretary from 2009 to 2013...

...The FBI is trying to determine the origin of the highly classified information that was found in Clinton emails ... the department also has been unwilling to say whether the private email system, used by Clinton and close aides Huma Abedin and Cheryl Mills, should be considered an official State Department network covered by FOIA laws.

...The FBI probe of State Department servers is the latest disclosure on the criminal investigation into the private Clinton email server that has embroiled the leading Democratic presidential candidate for several months.

The politics surrounding the probe prompted FBI Director James Comey to tell reporters last week that the bureau will not be influenced by politics... “One of the main reasons I have a 10-year term is to make sure that this organization stays outside of politics, and if you know my folks, you know that they don’t give a whit about politics,” Comey said, adding that the FBI has devoted sufficient resources and personnel so that the Clinton email probe can be completed in a timely way.

Those remarks were the first official confirmation of the investigation... In a sign of increasing worries about the probe at the Clinton campaign, the New York Post reported that an unidentified legal aide to Clinton has advised her to hire a criminal defense lawyer.

The number of communications regarded as classified is about 400 ... Security analysts have voiced concerns that foreign hackers may have breached the private email server.

One theory is that Clinton aides who were cleared for access to national security secrets first read classified reports on State Department information system and then “gisted” the material into private emails for Clinton.

Let me put it in simple terms for any Democrats reading along: it would seem that one or both of Clinton's most trusted aides, Huma Abedin or Cheryl Mills, broke federal laws regarding the handling of classified information. If they were normal peons like us, they'd already be breaking rocks at Leavenworth and braiding Top Dog Noxzema's hair.

At this point, I predict a race to a plea bargain between Huma and Cheryl, with the winner gaining some sort of immunity.

Get to steppin', ladies. But make me a sammich first.

Neither will have to plea w/promised immunity. They are both in the minority de jour times two. And, as we've been admonished and lectured time and time again, it is "us" who wage the "war on women." So, there. Either it's b/c of Huma's alleged-right-wing-conspiracy ties to the one and only protected worship practice allowed AND she's a woman, or it's b/c CM is protected as part of blm AND she's a woman. No matter, we lose. Again. Dayum sure no one in the DC arena has the cajones to do anything about hrc no matter what she's done. Just my opinion... BT in SC

Foggy bottom: "don't like the Israeli's, have a romantic fascination with Iran"

Or, they're just deranged. Really really deranged. Mad dogs. And SHOULD be treated as such!

So, Hillary sends Cheryl and Huma down to the State Department SCIF to find out what classified, top secret reports say about this & that. Then Cheryl and Huma, instead of talking to her directly and on a secure phone line, write emails to her containing the top security classified information. Of course those emails are sent to Hillary's private email account, arriving on her private server. The same server reports say has been hacked by numerous entities.

First question: why is Hillary so damn lazy that she can't go read the classified, top secret reports herself?

Second question: why did Hillary allow her closest aides to email her this classified, top secret information to her private server? She KNEW that was not allowed, regardless of her assertions that she was allowed to use private email and allowed to have a private server; said assertions have yet to be confirmed by any authority except Hillary.

Third question: why aren't prominent Democrats, concerned with our national security, screaming at the tops of their lungs about this, why are they protecting Hillary, President Obama and his entire Administration? This some serious wrongdoing and dangerous as it can be.


First off, none of this would be investigated unless DOJ and the FBI got a "nod" from the White House and if by chance they started this on their own, it would've been shut down in five minutes on the White House say so. Bubba right now has to feel like a real chump, he saved Barry Hussein's ass right before the last election, after having the "race card" played on him during the primaries in South Carolina.

Barry Hussein {Valarie Jarrett} has to think it is much more important to take "the bitch" out at the knees verses any smear that it would leave on his administration. One has to ask . . . .why and to what end? It has to be more than just a party power struggle.

I say Mills takes the deal first, she has been keeping secrets for Hillary and the Clinton's for decades. To that end so has Huma, but I say Huma picks up her "weiner" and takes off back to the Middle East, gets a heroes welcome, when she returns to her "real employer" all these years. . . .The Muslim Brotherhood. Huma has way too much 'splaining to do, if she hangs around for too long.