On a mission into Earth orbit on a space shuttle, a veteran astro-jockey (Clooney) is paired with an attractive scientist (Bullock). Bullock's job is to repair a malfunctioning Hubble-style telescope while Clooney tests a new jet-pack, but their mission is suddenly aborted when a nearby satellite explodes, sending deadly shrapnel hurtling through space.

The resulting storm of debris smashes the shuttle and everything nearby, detaching Bullock from her lifeline and hurtling her into the dark abyss of space. 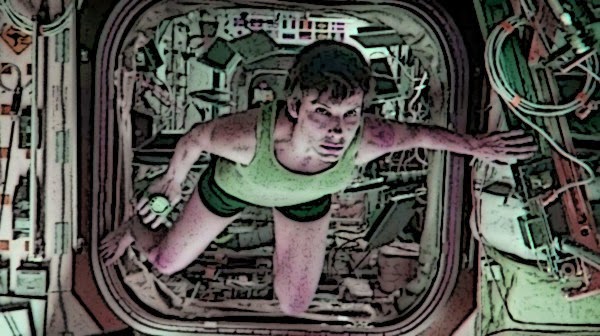 Bullock's panic attack is becalmed by the soothing voice of Clooney, who appears no more fazed by the catastrophe than he would be by a strong breeze on Earth. Clooney is able, through some unexplained process, to locate Bullock and then retrieve her.

But they return to a shuttle that has been utterly devastated; its other passengers have been shredded in their spacesuits or frozen to death thanks to gaping puncture wounds in the fuselage.

Thankfully, the International Space Station (ISS) is within jet-pack distance and he hauls Bullock that-a-way while playing country music and amusing her with a cornball repartee. As they near ISS, the orbiting debris returns and once again nearly rips the pair apart.

Anchored to ISS only by a single strap and having grasped Clooney's tether, Bullock tries to haul him in. Sensing that she's losing her purchase to ISS, Clooney sacrifices himself to the dark void, severing the tether while reciting gangsta rap from the nineties. Maybe I made that last bit up, playa.

Before he disappears from sight, Clooney is able to direct her to the ISS airlock. With almost no oxygen left, Bullock hauls herself to safety inside the massive space station. ISS has already been abandoned because of the debris, leaving only a single Soyuz docked to it.

The sanctuary is short-lived, however, as a fire has begun to break out. With only seconds to spare, Bullock secures herself in the Soyuz only to find that it, too, is damaged.

Good news: a Chinese orbiter is nearby. Bullock endures a harrowing ride to that vessel and, after a number of near catastrophes, is able to descend to Earth in one of the Chinese capsules.

Exhausted yet? The visual effects are stunning, but if you stop to consider all of the coincidences necessary to pull off the plot-line, you'll probably come to the same conclusion I did. With her luck, Bullock should spend more time at the craps table than in space.

Put a mustache on that floater and you'd have a cowboy.