Lying Scum (Which Is the Term They Prefer, I Hear) at ThinkProgress Think Their Readers Are Idiots (and They're Right!)

Whatever George Soros is paying the kooks at ThinkProgress is money well-spent in my book.

After all, the money he sends these buffoons turns out to help the cause of Constitutional conservatism as often as not. 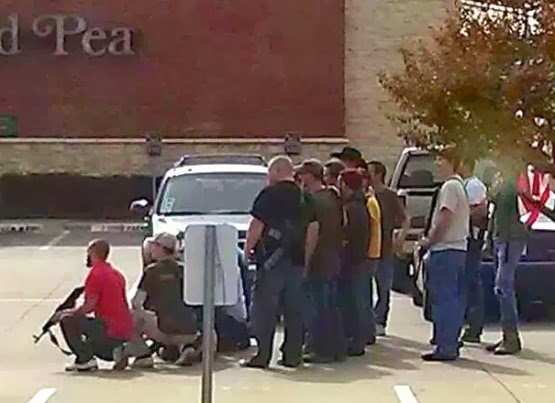 ...the picture above is deeply misleading. As one Twitter user showed me, the group was, in fact, posing for a picture. (UPDATE: This Facebook page suggests that it was Moms Demand Action that took both pictures!)... ...What a difference 90 degrees makes.

As it is everywhere else, it is illegal in Texas for those carrying guns to disturb the peace, to intimidate, to brandish, or to threaten other citizens. But peaceful carrying is allowed in Texas, and there is no exception for demonstrations.

Writer Charles C. W. Cooke gives the crackpots at TP the benefit of the doubt, but when it comes to the totalitarians on the left, never chalk up to ignorance what can be ascribed to malevolence.

Their ends are pure evil, of that there is no doubt.