OH, MY: It would appear administration officials Henry Chao and Marilyn Tavenner lied under oath to Congress

With the NSA’s phone call monitoring and Edward Snowden on many minds, it’s not exactly a comfortable time for the government to roll out a massive computer project dealing with personal data like income, Social Security numbers and ethnicity. 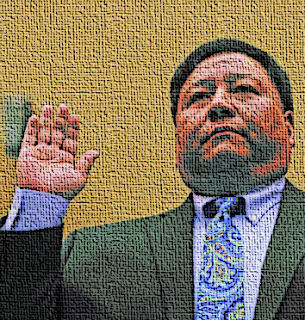 But Henry Chao, a lead technology information officer from the Centers for Medicare & Medicaid Services, said officials have completed about 80 percent of the safeguards to protect privacy when the agency rolls out what it calls “The Hub.” ... “It is important to understand that the hub is not a database; it does not retain or store information,” said Marilyn Tavenner, the CMS administrator, during a heated congressional hearing Wednesday.

She and Chao said the agency will complete the required tests and meet privacy regulations by Oct. 1, when health exchanges are scheduled to open. Their comments came in testimony to the House subcommittee on energy policy, health care and entitlements, which is part of the Oversight and Government Reform Committee...

Tuck the date of 17 July 2013 away. Now let's review some email traffic flying around Chao's office less than two weeks prior to that pair's testimony.

In emails from July, released by the House Energy and Commerce Committee, Obama administration officials write of unskilled developers and a series of missed deadlines. One email said the "entire build is in jeopardy." But when the administration's top people in charge of the implementation testified before the committee in the months leading up to the site launch, they said just the opposite — that they were ready...

• The only developer who was working on the payment pages for enrollment quit CGI without programming the 10 key user interface pieces of the transaction part. "Needless to say it is in jeopardy," wrote CMS' Jeffrey Grant. 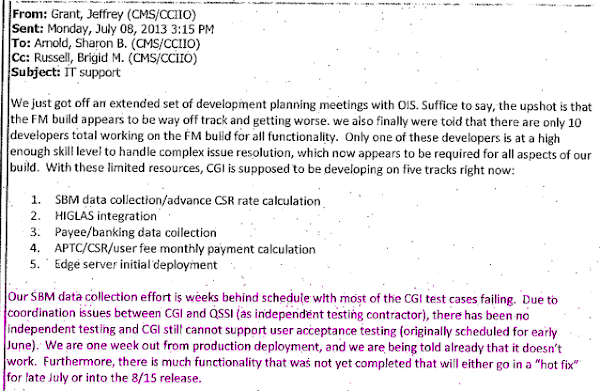 • The part of the system that does monthly payment calculation of insurance plans did not get priority by the contractor, who called it "not an October 1 item." (The health care insurance website launched Oct. 1.)

• "Seriously substandard staffing," is how Grant described its contractor's people power. The key contractor, CGI, missed deadlines due to "insufficient" programmer resources. A month from testing certain parts of the system, no development work had even started.

When informed by Grant of the complete unraveling of the project, Chao was in denial.

There's government-quality management for you: instead of trying to get to the bottom of Grant's dire status report, Chao instead sought to "refute" it.

Contempt of Congress, anyone?

As I asked about Benghazi, and Fast and Furious, and IRS-gate: where the hell is the Select Investigative Committee? That's the only way we'll get to the bottom of these unprecedented assaults on the Constitution by the most lawless administration in modern American history.

Makes me wonder sometimes if there is only one side in government. How else can you explain no closure whatsoever to ANY of the scandals? It's ALMOST like the don't want to get to the bottom of it. It's ALMOST like it's THEM vs. US.

Nothing will happen since we have a commie fucktard felon as an AG.

How shocking, two more lying pigs from ozero's gestapo. They lie at will as they follow their leader and know they will only get raises and promotions for doing so.

As I tell my buddy all the,time....SHIT DONT MATTER. They are all on the same team. When you finally figure that out, it makes perfect sense. THEY ARE ALL WORKING TOGETHER.