THE DUPLICITOUS CHRIS CHRISTIE: Man Who Refused to Oppose Obamacare Now Says It Was ‘A Train Wreck Anybody Could’ve Seen Coming’

Anybody could have seen it was a train wreck except him, apparently. 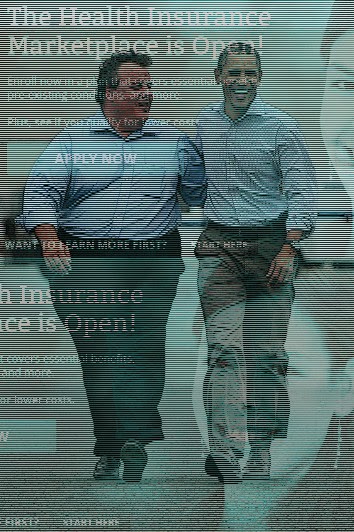 New Jersey’s Republican Governor Chris Christie slammed Obamacare as a “train wreck” in comments made at a Jersey radio station on November 25.

...Christie was asked why he didn’t join in on the state side and create a state exchange for Obamacare in New Jersey.
“This is just an awful law that made no sense and that’s why I didn’t get into a state exchange. And no, I have absolutely no regrets. In fact, I’m really glad that the train wreck’s not mine, it’s his,” the Governor said of Obama’s signature healthcare law.

Christie went on to slam the President as an example of someone who has never run anything in his life.
“This is a disaster. And it’s a train wreck that anybody who’s managed anything, ever in their lives could have seen coming.”
Governor Christie also said that the whole Obamacare program is a “failure.”

Christie's comments are, at best, disingenuous.

This is a man who wouldn't lift a finger to fight Obamacare, as Mark Levin observed at the time.

It costs nothing for the taxpayers of NJ to join the other states challenging Obamacare. All he needs to do is add his name on behalf of NJ to the other states. He didn't take the lead and now he won't bring up the rear. And just because Corzine ducked doesn't mean he has to. For all the loud bravado, on this hugely important issue he's a wimp. While others are doing all they can to kill Obamacare, spending the time and effort in federal court trying to protect the citizens of their states, Christie does nothing...

...Keep in mind that Obamacare creates massive new expenses for states via Medicaid. It's fiscally irresponsible for Christie to sit on his butt and do nothin. Is this what they mean by frank talk? Maybe his supporters inside the beltway can help us better understand while they're touting him for president.

Then we can hear the nation's biggest electoral loser of 2012 -- Karl "2% Victory Rate" Rove -- whine that Christie is "the only one who can win".

Which will be as accurate as his predictions about Mitt Romney in 2012 and John McCain in 2008.

Now that Christie sees that people hate the Democrats' Obamacare, he's against it. What a hypocrite. These politicians don't know what is going on until it's too late - by design, by ignorance, by incompetence, by not caring? Which is it? They don't give a rip how the law is hurting the American people - all they care about is being able to CAMPAIGN against it - I hope people wake up to Christie's duplicity. He's a liar like all the rest of them. TED CRUZ for President.

I'm anyone but Christie for 2016, but credit where its due: not creating a state exchange is a big deal.

I can absolutely see the GOP leadership and state media pushing Christie down the voters throats while the Dems fund a phony Libertarian third party candidate to siphon off enough votes to elect Shillary.

Kasich is a huge disappointment, but thankfully since I woke up to what a lying duplicitous bastard Phil Gramm was I now distrust all Republican's until they stick their necks out a la Ted Cruz.

The GOP establishment hacks will seek to make it so Christie hogs (pun intended) the spot for GOP nominee in 2016, because they know he will lose. The GOP establishment is happier when it has no responsibility, such as when they are in the minority. And when they do get stuck in the majority, they see to that problem by voting in the likes of Squeaker John Bohehner and Greasy Rebus to the leadership positions.

The Tea Party is our only way out.