GUEST POST: The Illegal Actions of our Autocratic President

Our country was founded as a constitutional republic; a federation of autonomous states tied together by a Constitution that stated explicitly what the powers of the federal government were. We have now been unofficially, yet fundamentally transformed into an autocratic “ineptocracy.” And we needn’t look any further for evidence than this week’s presidential attempts to “fix” the increasingly unaffordable Affordable Care Act (ACA). 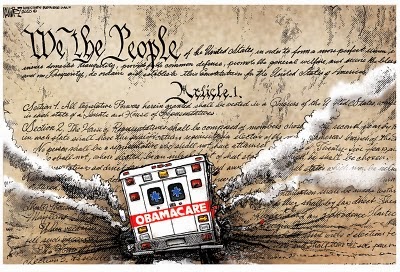 Having been caught in his perpetual lie, “if you like your insurance you can keep it,” the president this week promised to “fix” it, by allowing people to keep their insurance plans for another year, if they wanted. Not only is that genie out of the bottle and operationally impossible to put back in, but more significantly, it represented another evidence that this president feels his power is not constrained or limited by the Constitution, or by the rule of law.

Yet, just as he did in July when he delayed the ACA employer mandate by a year, this week he, without authority, said he would “allow” people to keep their policies for another year if they liked them. The president has no such authority! Those are laws passed legally – although regrettably – by Congress and signed into law. The president has no authority to arbitrarily choose what laws to enforce, which to not, or change laws arbitrarily and illegally by his own discretion. His oath is to faithfully execute them!

It makes no difference that the law he whimsically changed this week has his name on it, as even he refers to it as Obamacare. He still doesn’t have the power or authority to autocratically change aspects or dates of implementation of the law.

He also acted illegally when he declared he would not enforce the Defense of Marriage Act, as well as his fiat that he would implement elements of the so-called Dream Act for immigration reform, on his own, with no Congressional action.

An autocrat is one who has absolute power. And that is how our president is acting. The Constitution was written brilliantly with inherent checks and balances on the power of any one of the branches of government. But apparently, when you’re Barack Obama, there’s no perceived limit to your power; you can do as you please, when you please, and when you mess up, claim you never knew about it until you “read it in the press,” like the rest of us. Outside of the fantasy world of the Washington Beltway, such an egocentric and narcissistic attitude would be considered delusional. But that’s what we got when we elected, and then reelected, someone with a messiah complex.

I have long maintained that our republic can only survive if people elected to office honor their oath to “preserve, protect and defend the Constitution of the United States of America.” Every time Obama spuriously and capriciously changes a law, chooses which he will execute and not execute, he is definitionally acting outside of the law, and he breaks his oath of office anew.

I mentioned that we have an autocratic ineptocracy, and explained the autocratic component. We have been fundamentally transformed into an ineptocracy which is a “political system of government where the incompetent are elected by the unproductive in return for goods and services redistributed from the competent and productive, until the former so outnumber the latter that the system collapses.”

Several years ago Ayn Rand said, “We are fast approaching the stage of ultimate inversion: the stage where government is free to do as it pleases, while the citizens may act only by permission.” It seems obvious that we’ve now achieved that state of ultimate inversion of our founding principles. And the inversion is exacerbated by the fact that it’s the arbitrary actions of an autocrat at the helm of the nation that declares that government can do as it pleases, while we paean citizens have our liberty eroded further with every stroke of his pen, and utterance from his lips.

There’s nothing we can do to rein in the autocratic hubris at the head of the country. We can only hope that in three years we may choose someone who respects the law, follows it, and will fervently keep the oath to preserve, protect, and defend the Constitution. And we can pray that our fundamental transformation is not irreversible. In the meantime, we can attempt to follow Thomas Jefferson’s counsel to “Educate and inform the whole mass of the people… They are the only sure reliance for the preservation of our liberty.”

This is roughly the 14th time this President has flouted the Constitution, all without repercussions. Why?

Because the Republicans are scared to death to bring up charges on a Black President. A white one maybe, but certainly not the first black one.

The Supreme Court will not step into this matter, as they apparently hold Constitutionuion in disregard as well.

My feeling is the military should step in, as they are sworn to upholConstitutionituion, the Generals be damned. Or, perhaps it's time for the people to "step in". Either one works for me.

Thank goodness for John Boehner and the brave knights of the GOP.

At least the chocolate emperor publicly graced us with his acknowledgement of how omnipotent he is and passed a new law at a press conference last Thursday.

Most kings, emperors, and demi-gods, they have a certain fondness for their subjects. I guess a one year extension is manna from our GOTUS, (God Of The United States), our king can always use an extra year in order to determine if there is any wealth among the little people he and his court missed.

Remember, the serfs of olde England had the long bow, serfs in Amerika have the AR.

My problem with the majority of most recent presidents is their tendency to issue "signing statements" when signing bills. The "signing statement" is nothing more nor less than an announcement of presidential intent not to enforce all or part of a law. That is not constitutional. George Bush did it all the time. It is illegal, impeachable and wrong. The constitution provides the only methods of dealing with a law the president doesn't like. a) Veto; b) send it back to congress with an explanation as to what he objects to. Congress then has three choices: a) make the changes; b) override the veto; or c) abandon the matter. That's it. Any of the other actions are unconstitutional. Obviously too complex for a "constitutional scholar."