BRILLIANT: John Kerry and Barack Obama Negotiate "the Deal of the Century"... for Iran's Nuclear Terrorists

I have my issues with Senator Mark Kirk (R-IL) on many of his domestic policy positions, but he deserves our praise for standing strong on national security. In particular, his staff has produced this helpful chart, which summarizes the outstanding deal evangelized by the Neville Obama administration. 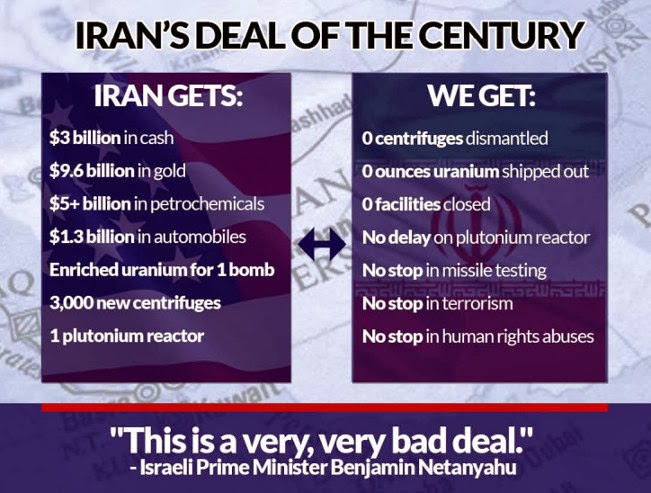 A deal that undermines sanctions and doesn't stop a future with Iranian nuclear weapons is the deal of the century for Iran.

...According to multiple news reports, the P5+1 offered the following sanctions relief to Iran during the latest round of negotiations: repatriation of $3 billion in Iranian assets trapped in accounts overseas, in addition to the suspension of current sanctions with respect to precious metals (like gold), Iran’s petrochemical and car industries, and aviation parts.

News flash, Democrats: when you surrender faster than France, you're doing it wrong.

Looks like Hanoi John and the santa-in-chief obama aren't doing so good with "our" allies. First England's Parliment vote on Syria now the French.

I just can't grasp on how frickin stupid this administration is. Give the Iranian government enough material for a bomb? Really?? Arm the largest sponsor of terror, the nation responsible for arming anyone who hates us, with a nuclear weapon?

It does not matter if it was obama or other. The deal needs much tweaking. Let's begin with either Iran gives the USA all that was supposedly offered to Iran or there will never be peace - NOT Ever. We The People of the United States of America will not stand/allow any one to trample on us.