The Obamacare rollout debacle has left many political losers in its wake but just a handful of winners. The losers are obvious: every Democrat politician and the entire establishment media complex look like, for lack of a better phrase, lying wankers.

Senators Ted Cruz (R-TX) and Mike Lee (R-UT) look like heroes, having warned repeatedly of the impending disaster and doing everything in their power to stop the onslaught of canceled policies. Had the RINO old guard, led by the feckless John McCain and Mitch McConnell, actually backed up their conservative betters, the American people might be having a very different kind of conversation today.

Earlier this week Cruz explained that Obamacare's worst damage is yet to come:

The thing about Obamacare, the five million who lost their health care right now, is just the beginning of this that. The next shoes that are going to be dropping, one of the next shoes that's going to be dropping is you're going to see more and more people realizing they can't keep their doctor. Texas Oncology, one the very best cancer centers in Texas has just announced it's not going to participate in Obamacare. 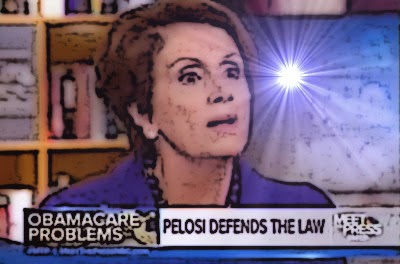 I've gotta tell you, I've got people who are close friends who are cancer survivors who are discovering now they can't go to their cancer doctor because Obamacare has denied them their doctor. That's the next shoe that's going to fall. After that, you're going to see premiums.

You know, the 100,000 people who have signed up, it's a sign of how this system isn't working. But the consequence of that is this spring, when the next set of premiums come out -- we've seen sticker shock already as premiums have gone up -- but the next waves of premiums is likely to go up dramatically.

And then the shoe to drop that I think is most damaging, potentially, is the 90-plus million people who have employer-provided health care. I cannot tell you how many HR directors at big companies have said they're just getting ready to dump their employees off of their health care and onto these exchanges.

The tradeoff that Obamacare was all about -- that the president was not honest with the American people about -- it was a trade off that was focused on providing insurance to part of the group of Americans that didn't have insurance. And that is a noble goal. But that trade off to provide insurance for tens of millions of people -- and CBO estimates that even if fully implemented, there will be 20 to 30 million Americans without insurance. But to provide insurance to those tens of millions of Americans -- the tradeoff Obamacare made -- is that we're going to screw up the insurance of the remaining couple 100 million people. I think that's a terrible trade off.

Now is the time to pass a real repeal bill. Repeatedly, if necessary.

As the damage grows and the midterm elections near, the pressure will increase on endangered Democrats to eradicate Obamacare. In fact, when it came to Rep. Fred Upton's bogus "Keep Your Plan" bill, 39 Democrats defected and voted with the GOP.

Keep the pressure on.

The House must keep voting to repeal this outrageous, unconstitutional law. Keep the pressure on the Democrats. Squeeze them in the nutcracker. Squeeze them until they crack.

These psychopaths and crooks running this country destroy every single thing they touch.

Far past time to get rid of every single one of them.

We don't call her 'Crazy Nancy' Pelosi for nothing.

This is one sick woman.

Obama is a sicko who was manufactured. Pelosi was born a sicko.