A month before the 2012 presidential election, the Bureau of Labor Statistics released new unemployment numbers. They turned out to be a stunning surprise: the official U-3 unemployment rate dropped from 8.1 percent in August to 7.8 percent in September.

At the time, former GE Chairman Jack Welch smelled a rat and said so publicly. 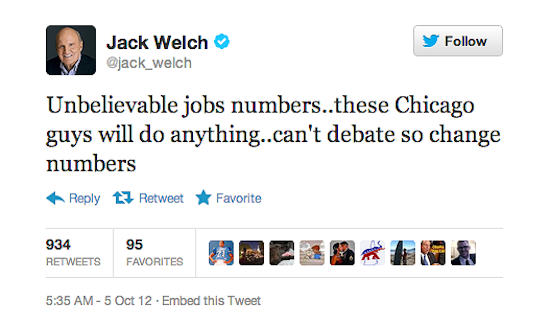 Welch’s tweet unleashed a firestorm of criticism with numerous accusations of him being a ‘conspiracy theorist.’ CNN attacked Welch’s hiring history claiming that Obama’s record on jobs trounced that of Welch. The site Tech Crunch deemed Welch a crazy, accusing him of inspiring a ‘web-wide Obama conspiracy’. In response to Welch’s statement, then Labor Secretary Hilda Solis said, “This is a methodology that’s been used for decades. And it is insulting when you hear people just cavalierly say that somehow we’re manipulating numbers.”

Barry Popik reminds us that the pencil-necked journoleftist named Ezra Klein was among the first to mock "jobbers" (i.e., "jobs birthers"):

Of course, as we recently found out, the White House falsified the unemployment numbers in one of their various criminal enterprises designed to steal the 2012 election.

Now that Welch (and everyone of us with an ounce of common sense) have been vindicated, how long will it take the unemployment denialists like Gregory Ferenstein, Felix Salmon, the freakish Austan Goolsbee, and the loathsome Ezra Klein to apologize? 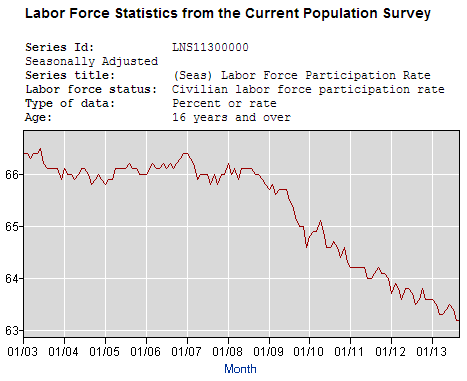 That's a rhetorical question, of course. Religious extremists like these leftists aren't bound by facts, logic, reason and history. That's why they're fanatics, irrational kooks who have an insatiable desire to control others.

In a word, they're Democrats.

The left and their useful idiot 'Barack Hussein Obama' have now even corrupted the census.

Is there a single federal agency worthy of trust anymore?

Not anymore. In fact, it's the opposite: under Obama and his commie mommie Valerie Jarrett, the federal government has become the enemy within.

We knew mischief was afoot when the White House took control of the census. Falsifying unemployment rates was likely a minor point compared to what they got away with. Let's add data mining to find where they could get votes that exceeded the numbers of registered voters.
There was indeed "treachery in the air" and the White House was as dirty as Jimmy Hoffa.