President Obama Really, Really Excited That More People Than Ever Will Die in Car Crashes

On the White House’s official Twitter page, President Obama bragged that under his administration, “We set new fuel standards that will double the distance our cars and trucks go on a gallon of gas.” 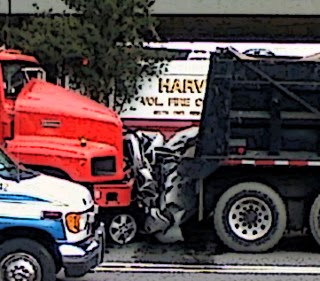 Ignore for a moment that the Department of Transportation and the Environmental Protection Agency slapped the burdensome regulations on car makers 15 months ago, so the Tweet is obviously a pathetic diversionary tactic to shift the public’s attention away from the recent Obamacare debacle that has further tarnished Obama’s presidency.

Let’s focus instead on the reality that stricter fuel standards kill thousands of people a year.

Since the simplest way to improve a vehicle’s mileage is to reduce its weight, fuel efficiency standards turn cars into “small, underpowered death traps,” according to the National Center for Policy Analysis.

While Obama’s ridiculous miles per gallon regulations won’t fully take effect for another dozen years, previous fuel standard policies are responsible for many of the deaths we see today.

In 1999, USA Today calculated that the reduction in the size and weight of passenger vehicles necessitated by fuel efficiency standards had resulted in more than 46,000 deaths. There have been thousands more Americans killed unnecessarily in the years since that report.

Highway deaths have been spiking recently. There was a 5.3% increase in deaths on America’s roads last year alone. That’s not surprising since, in 2011, another significant increase in minimum miles per gallon for passenger cars was put in place. As drivers upgrade to newer car models, they are unwittingly putting themselves in lighter, more dangerous cars.

Judging by the White House’s tweet, it’s apparent that the President is proud to force Americans into even smaller, lighter cars. He seems disturbingly at ease with the thousands of American deaths his decision will cause.

Why didn't he just raise the limit to a thousand or a million miles per gallon? That would really save gas.

If a large enough percentage of the people killed in car crashes are older folks, this could help bring down Medicare and Social Security costs. :-)

Since most people are killed while driving to or from work Obama doesn't have to worry about killing off his core voters.
Since they don't work.