But I'm sure they're only trying to help.

According to a report on state-owned TV in Russia (via the BBC), ...[s]ome irons imported from China allegedly showed evidence of including wireless spy chips that could connect to unprotected Wi-Fi networks and spread viruses. And tech blog The Register notes that reportedly chips were also found in kettles. 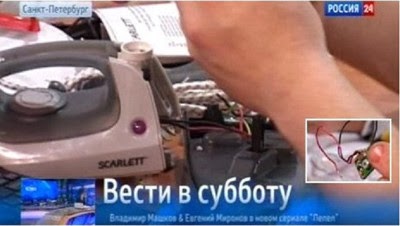 The Russian news agency Rosbalt reported that a few dozen products were at retailers in St. Petersburg. The spy chips had infiltrated some company networks, using them to send spam.

It sounds like a spy thriller spoof, but this is hardly the first time Chinese products were reported infested with ways for someone to break into systems. There was the report last year that a researcher found a so-called back door in a military-grade computer chip, meaning that someone could, from anywhere, get ready access to the chip and, through it, connected systems.

...There have been cases where suspected hacking from China paralleled Chinese military interests, again raising suspicion that the government is either directly or indirectly involved with both military and industrial espionage.

But given the vast number of products made in China and the increasing percentage of items that included chips of some sort, the potential for problems could be disturbing. One step, as CBS MoneyWatch's Dave Johnson recently noted, is to turn encryption on for all your wireless networks. That locks out any device that doesn't know the password.

Of course, that wouldn't necessarily help block a new computer "super virus" that seems to infect computers even without a network connection, according to an Ars Technica report. The original discovery was by a highly-respected security researcher and no one is sure how it works, other than possibly using high-frequency sound emitted by the speaker of an infected computer and received by the microphone of the target. Could an infected household appliance include a tiny speaker that might broadcast such a sound? Certainly.

"The Internet of Things" refers to the imminent trend of attaching all sorts of devices, appliances and sensors to the Internet.