The Secret Goal of the Obamacare Ruse

In drawing attention to Andrew C. McCarthy's seminal deconstruction of Obamacare, Robert Stacy McCain describes the program as "a river of lies, with headwaters in hell."

McCarthy and other Constitutionalists grasp what few in the Republican establishment seem to: Obamacare is a ruse. 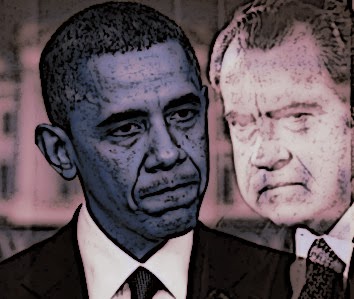 Fraud can be so brazen it takes people’s breath away. But for a prosecutor tasked with proving a swindle — or what federal law describes as a “scheme to defraud” — the crucial thing is not so much the fraud. It is the scheme.

To be sure, it is the fraud — the individual false statements, sneaky omissions, and deceptive practices — that grabs our attention. As I’ve recounted in this space, President Obama repeatedly and emphatically vowed, “If you like your health-insurance plan, you can keep your health-insurance plan, period.” The incontrovertible record — disclosures by the Obama administration in the Federal Register, representations by the Obama Justice Department in federal court — proves that Obama’s promises were systematically deceitful...

Still, to show that politicians lie is like pointing out that it gets dark at night. The lie, the fraud, does not tell us why they lied in this instance. The fraud does not tell us what the stakes are. To know that, we must understand the scheme — the design.

The point of showing that Obama is carrying out a massive scheme to defraud — one that certainly would be prosecuted if committed in the private sector — is not to agitate for a prosecution that is never going to happen. It is to demonstrate that there is logic to the lies. There is an objective that the fraud aims to achieve. The scheme is the framework within which the myriad deceptions are peddled. Once you understand the scheme, once you can put the lies in a rational context, you understand why fraud was the president’s only option — and why “If you like your plan, you can keep your plan” barely scratches the surface of Obamacare’s deceit.

McCarthy notes that in 2003 Illinois state Senator and perennial back-bencher Barack Obama was plain-spoken about health care for all. He was a noted fan of single-payer, a completely centralized, Soviet-style form of health care, and there is no reason to doubt that was always his endgame.

That is the Obamacare scheme.

It is a Fabian plan to move an unwilling nation, rooted in free enterprise, into Washington-controlled, fully socialized medicine. As its tentacles spread over time, the scheme (a) pushes all Americans into government markets (a metastasizing blend of Medicare, Medicaid, and “exchanges” run by state and federal agencies); (b) dictates the content of the “private” insurance product; (c) sets the price; (d) micromanages the patient access, business practices, and fees of doctors; and (e) rations medical care. Concurrently, the scheme purposely sows a financing crisis into the system, designed to explode after Leviathan has so enveloped health care, and so decimated the private medical sector, that a British- or Canadian-style “free” system — formerly unthinkable for the United States — becomes the inexorable solution.

Single-payer was always Obama's goal and that is why he had to lie. As McCarthy notes, his are the tactics of Alinsky.

...He stressed pragmatism: a gradual campaign that kept the ultimate prize in sight. “I don’t think we’re going to be able to eliminate employer coverage immediately,” he told his hard-Left base at a 2007 SEIU health-care forum. “There’s going to be potentially some transition process. I can envision a decade out or 15 years or 20 years out.”

The [Affordable Care Act’s] grandfathering provision’s incremental transition does not undermine the government’s interests in a significant way. Even under the grandfathering provision, it is projected that more group health plans will transition to the requirements under the regulations as time goes on. [Officials of the Department of Health and Human Services] have estimated that a majority of group health plans will have lost their grandfather status by the end of 2013 [emphasis added].

Understand what this studiously unthreatening, gradualist gobbledygook means. A “group health plan” is employer-provided insurance; the phrase thus blithely refers to the “transition” of 156 million Americans who get health insurance for themselves and their families through work...

It is clear that well over 100 million Americans will lose their health insurance in pursuit of a Utopian fantasy that centralizes the entire health care industry into a labyrinth of government agencies. Legions of bureaucrats -- unelected, unaccountable and uncontrollable -- will mestastasize into the medical analogue of the Department of Motor Vehicles.

Socialized medicine has been the Holy Grail for the progressive, Fabian socialists for 100 years. Now that it has been cemented into place -- with establishment Republicans unwilling or unable to fight it -- the death of the Republic is all but certain.

I think they have made a grave mistake imposing this Fabian abortion of dictatorship on we the people.
It will be these fools and clowns demise.
And good riddance too.

It is time to take our country back from these lousy vermin.

Obamacare is a blessing in disguise because the scope of their unlawful immoral acts
reveals their utter illegitimacy.

Of course it's a ruse; it was designed from the get-go to fail. If it succeeded, how would Amerikka ever get to single-payer socialism? It will never be fixed. It wasn't designed to work and it wasn't designed to be fixed. Talking about fixing and deadlines and all that other bullsh*t it is moronic.

The only political discussion we should be having is about the urgency of impeaching Obama and Holder, arresting Jarrettt, and mobilizing ourselves to get our freedom back.

This country has been taken over by the communuists.

And since when is Obama a Fabian socialist? He's a Marxist-Leninist.

Pardon, I mean no offense, you give a psychopath criminal credit as something legitimate.

At best he is a traitor to the office and oath, and a domestic enemy our Constitution was created to defend against.

Obama is strangulating America, and doing it with a smile on his face. The Country is on fire and no one has the balls to pull the alarm.