Now that we have evidence that the Obama administration lied about unemployment numbers to help turn the 2012 election, the House Oversight Committee has announced yet another investigation. 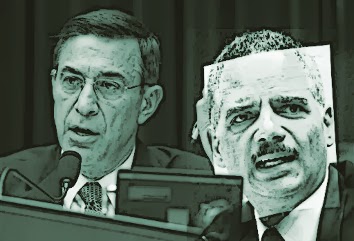 An anonymous whistleblower in a New York Post column by John Crudele is alleging that unemployment jobs data in the current population survey conducted by the Census Bureau and the Bureau of Labor Statistics was manipulated in 2012 to help Barack Obama get re-elected... According to the source, specifically the Oct. 5, 2012 jobs report was faked — just in time for the election. Worse, the practice reportedly continues to date.

...Nathan Mehrens, president of Americans for Limited Government, said the allegations were "extremely serious," noting "financial markets and economic policymakers all over the world depend on the integrity of jobs data to make informed decisions."
Mehrens warned, "This is a case where distorted data will result in distorted policies that harm the well-being of the global economy." Particularly, the Federal Reserve has said it is waiting until unemployment drops below 6.5% before it begins raising interest rates.

Unfortunately, Issa has plenty of experience in opening -- not closing -- investigations. To date, the following major Obama administration scandals lie largely dormant, yet in a normal era each would result in cries for impeachment.

• Issa, Treasury Wrangle Over Subpoena to IRS for Tea Party Documents: "“As of today, almost five months since the committee’s initial request, the department has produced almost no internal communications about the substance of the investigation and has only produced material in response to a few of the committee’s multiple document requests,” Issa said."

• Issa calls denial of dismissal in Fast and Furious lawsuit ‘repudiation’ of DOJ: "This ruling is a repudiation of the Obama Justice Department and Congressional Democrats who argued the courts should have no role in the dispute over President Obama's improper assertion of executive privilege to protect an attempted Justice Department cover-up of Operation Fast and Furious,” Issa claimed."

• DOJ’s Phone Sweep of AP Reporters Draws Dual House Inquiries: "“From a constitutional standpoint, the First Amendment, it’s very clear that Judiciary will have the lead on this,” said Issa, who is also a member of Judiciary. He added that he has “a fairly full plate” with investigations into the Benghazi attacks and alleged Internal Revenue Service misconduct, among other things... However, in a follow-up statement later in the day, Issa signaled he might be more closely involved than he had previously suggested."

The Obama administration is the Roadrunner and Issa is Wile E. Coyote.

The proper way for Congress to investigate these impeachable offenses is to name Select Investigative Committees. These dedicated committees would not be burdened by multiple investigations or extraneous activities.

Whether it is hubris or fear of exposure of their own secrets, the House Republican leadership is operating irresponsibly and without regard for the best interests of the American people.

We must demand that Republicans name select committees, before it's too late to make a difference. Call the House Oversight Committee at (202) 225-5074 and make your voice heard.

I like that Issa, quite a criminal himself, is probing everyone else's misdeeds.

This dude's past history is something to behold. Where I come from, we call that hypocrisy.

Issa needs to put some gift wrap and bows on the current investigations that he has in the fire.

These investigation have been going on long enough, it's high time to nail someone.