POTUS was right about one thing: Obamacare really did bend the health care cost-curve... 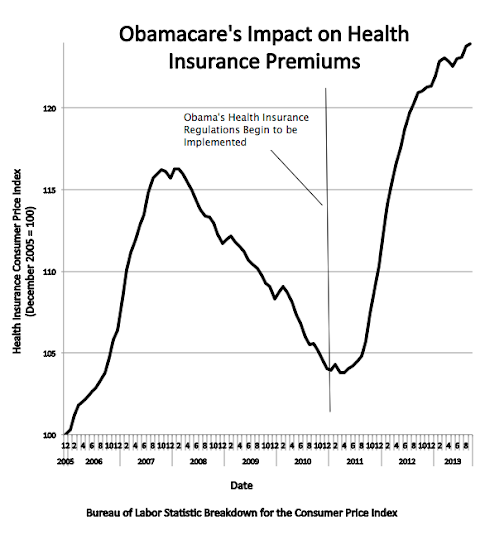 Note this graph doesn't yet include the big changes that will take place on January 1st.  But what we are already seeing I think qualifies as another promise broken by President Obama.  During his press conference yesterday, President Obama again attacked insurance companies, blaming them for any future problems with Obamacare.


And -- and so what we want to do is to be able to say to these folks, you know what, the Affordable Care Act is not going to be the reason why insurers have to cancel your plan. Now, what folks may find is the insurance companies may still come back and say, we want to charge you 20 percent more than we did last year, or we're not going to cover prescription drugs now. But that will -- that's in the nature of the market that existed earlier. . . .

The data is available from the "CPI-U News Release Companion File" at the Bureau of Labor Statistics website.

Oh, and then there's this: Revealed: Obamacare plans will cost MORE 'in many cases' even with government subsidies, officials admit for the first time.