OPRAH WINFREY: Millions Who Lost Health Insurance Are All Racists For Being Furious With Liar-In-Chief

Consider the hypocrisy of this self-made billionaire -- who leveraged the most wonderful, beneficent, tolerant society in the world to become incredibly wealthy -- trashing her own country. The overstuffed, over-made-up kook known as "Oprah Winfrey" -- if that is her real name -- is truly beneath contempt.

[BBC reporter Will] Gompertz asked Winfrey if she thought the problem of racism was solved. 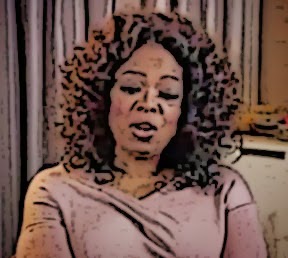 “Of course, the problem is not solved,” the actress said. “As long as there are people who still, there’s a whole generation – I say this, you know, I said this, you know, for apartheid South Africa, I said this for my own, you know, community in the South – there are still generations of people, older people, who were born and bred and marinated in it, in that prejudice and racism, and they just have to die.”

If President Obama weren’t an African-American, Gompertz asked, would he be treated differently?

Winfrey mentioned the time when U.S. Rep. Joe Wilson, R-S.C., called Obama a liar while the president was delivering a speech to Congress.

I'll tell you a level of disrespect, you hateful shrew:

How about disrespecting the millions of Americans who just lost their health care after being promised dozens of times by the Liar-In-Chief that they could "keep their plans"?

How about disrespecting the families of those killed in Benghazi? A president who lied right to their faces about the cause of the attack and didn't lift a finger to save those killed during the nine-hour running gun battle.

How about disrespecting the families of the hundreds killed by Operation Fast and Furious? A president who gave or sold thousands of military-grade weapons to Mexican drug cartels as part of a truly evil plot to demonize gun-owners.

How about disrespecting all of those conservatives, Christian, and pro-Israel groups targeted by Obama? A president who used the IRS to win the 2012 election and then lied about it.

You're a hack, a clueless know-nothing, a Leftist kook who claims entirely legitimate criticism of the Liar-In-Chief's outrageous activities is based on "racism".

Go drink a nice, tall glass of shut-up juice and get the hell off of my television.

If Obama did not want to be treated with disrespect in being called a liar, he should have thought twice before opening his mouth and telling so many lies. In the real world, there's a correlation between the two!

Respect is something earned, not automatically bequeathed because of a racial narrative or supremacy of race, creed or political standing.

Oprah is a race merchant. A race baiting con artist. And a spoiled rich snob.

She can take her racism and shove it.

She, like many of her racist stripe, in their hubris, have used their fame and station in life to spread such hatefulness.
It is unfortunate millions of American's have fallen for her patent lies and thinly veiled racial agenda.

I suspect she is feigning mock outrage over obama being called a liar, because that truth is a very revealing fact of both obama and oprah.

Why is it, that mouth piece, ignorant fools like this, always walk down a one way street.

Nine out of ten Americans could care less about a person's skin color.

Her ilk, when looking at a mirror, need to get past the image of their skin.

Such bigotry as from this dissimulating windbag begs the question just who is the racist.

Oprah is a phony, period. Everything about her is fake - from her hair to her nails to her public persona - fake, fake, fake.... No one cares what she says anymore, she's irrelevant.

How about the disrespect Obama showed giving a televised speech before a joint session of congress, pitching Obamacare, in which every statement he made about the law was verify-ably false?

Oh, go back to Europe and buy a purse. Consider while there, to do the Tina Turner thing, renounce Amerikkka and stay there. Please invite our patriotic Mooch to join you. Privileged ingrates=all hardships are skin based and any discourse otherwise is racist hate speech.

How is it that people of color believe they are exempt from getting called out on their bad behavior?

And in case Winfrey missed it, Wilson was right.

The problem is she is STILL richer in money than about 500,000 of us watching her or not watching her.
and why not use your billions to solve these problems you seem to see all around you instead of talking about them?
Heltau