Yeah, that Elon Musk is a genius! Who else could have invented exploding, coal-powered cars and gotten you and I to help subsidize him? 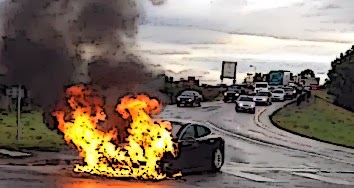 According to multiple reports, the federal agency investigated the charred body of a Model S in Smyrna, Tenn., just outside Nashville, last week. The vehicle caught fire after a collision with a trailer hitch on Interstate 24. The driver was unharmed.

Similar incidents occurred in Kent, Wash., on Oct. 1 and Merida, Mexico, on Oct. 18... The $69,000 to $100,000 all-electric sedan earned top crash-test ratings from NHTSA and top reviews from Trend and Consumer Reports magazines.

... "Three fires is a big number out of 19,000 [sold]," said Clarence Ditlow, head of the Center for Auto Safety, according to reports. "They have to open an investigation."

Tesla co-founder Elon Musk, speaking at a recent conference, said all three blazes were caused by crashes, not battery problems. "There's no reason for a recall," he said. "If you read the headlines, it sounds like Teslas have a greater propensity to catch fires than other cars. In reality, nothing could be further from the truth."

And who is Tesla founder Elon Musk? He appears to be a very clever fellow who's built much of his fortune on the backs of the American taxpayer.

...The federal government is, in effect, taking the tax dollars of low-and-middle-income taxpayers to subsidize luxury automobiles for wealthier people. How is that right?

Of course, Mr Musk knew that all along: his business model has been to make his profits on the margins provided by government subsidies, and has a net worth of between $6.7 billion and $7.7 billion, probably what you’d expect from a large Obama donor...

I'll say it again: when the complete history of the Obama administration is written, the corruption, cronyism and outright theft will make the Teapot Dome Scandal look like a stolen box of Girl Scout Cookies.

I have to wonder if this might be an attempt by albatross owners to recover their purchase costs. The picture shown looks to make that vehicle a write off.

OH! I wonder ... would insurance reimburse for replacement costs without consideration for subsidies? Is this actually some kind of profit scheme? Inquiring minds....

Press Watch said...
This comment has been removed by the author.
1:13 AM

The EPA is too BUSY to check this out
-
Leave them alone!

There is soooooo much more to the Elon Musk tale. http://hoocoodanode.com/2012/12/29/obamas-welfare-case-space-pioneer-buys-17-million-mansion/