Military Superiority: As China does its own Pacific pivot, a new report reveals that Beijing's strategic bomber is equipped with a land-attack nuclear missile and an armed drone nearly identical to one of ours developed through cyberespionage.

To the casual observer, the Chinese Hongzha-6 (H-6) bomber is not that impressive. The two-engine medium-range jet is a variant of the old Soviet Tu-16 Badger. That plane first flew in 1959 and versions have been deployed by the Chinese Air Force since 1968.

A prototype H-6 was used to airdrop China's first three-stage thermonuclear device at the Lop Nor Nuclear Weapon Test Base in Malan, Xinjiang, on June 17, 1967. 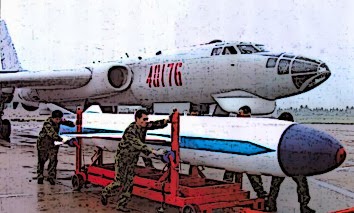 To military observers, however, its latest incarnation, the Chinese H-6K, is a significant advance in China's military capability and is continuing evidence of China's determination to dominate the Western Pacific and challenge U.S. dominance in the region.

As noted in the Oct. 8 draft of the forthcoming report of the U.S.-China Economic and Security Review Commission to Congress, the People's Liberation Army in June accepted the first of 15 new H-6K bombers, each with an important new difference:

They'll be able to carry four nuclear-capable Changjian-10 (long sword) cruise missiles on four underwing pylons plus two more in its weapons bay. This effectively extends the bomber's combat range to Okinawa, Guam and even Hawaii from China's mainland.

As Bill Gertz of the Washington Free Beacon reports, the upgraded jet is powered by Russian jet engines that can increase its range up to 5,500 miles. The CJ-10 missile it carries uses China's Beidou satellite navigation system for guidance and itself has a range of up to 1,500 miles.

While the commission's assessment is that the H-6K will be limited to non-nuclear cruise missiles and missions, Rick Fisher, a Chinese military expert with the International Assessment and Strategy Center, disagrees. In 2012, he notes, "Russia's former Rocket Forces chief of staff, retired Gen. Victor Yesin, explicitly warned that some of Chinese ground- and air-launched DH-10 cruise missiles are nuclear armed." The CJ-10 is a version of the DH-10.

Gertz quotes the Kanwa Defense Review, which reported in August that the new bomber "is capable of hitting targets throughout the western and central Pacific, including Hawaii. Other potential targets include Singapore, central India and Russia."

Fisher says China likely is developing several new long-range bombers to succeed the H-6K. They will have a range of up to 7,500 miles, plus an upgraded variable land-attack cruise missile, the CJ-20.

The commission report to Congress says "PLA modernization is on track to alter the security balance in Asia over the next five to 10 years, challenging decades of U.S. military pre-eminence."

The report also notes that in November 2012, China unveiled at an international arms show its new Wing Loong missile-equipped unmanned aerial vehicle. The Wing Loong so closely resembles the U.S. MQ-9 Reaper that analysts suggest it was designed and built largely with the aid of Chinese cyberespionage.

Known for their patience, the Chinese has begun another long march toward parity with and even supremacy over the U.S., starting but not limited to the Western Pacific.

Barack Obama is a traitor.