CHARTS - ALL 50 STATES ARE MORE CONSERVATIVE THAN EVER: Race-, Gender-, Ethnicity-panderers hardest hit

Recently on this blog, Larry Bartels drew attention to an astonishing fact: the public is as conservative as it has been in 50 years. To highlight this point, Professor Bartels presented the public’s policy mood — James Stimson’s measure of public support for government programs—from 1950 to 2012. In a recent article, Julianna Koch and I generated measures of policy mood for each state from the 1950s to 2010 (our measures our here). What we found is that the conservative opinion shift Professor Bartels highlighted repeats itself in every state.

The figure below presents one illustration of this pattern. Here we compare the policy mood in each state in the early 1960s (hollow dots) and in the early 2000s (solid dots). Higher values indicate a more conservative policy mood. In each instance, the solid dot is to the right of the hollow dot, suggesting that the public’s policy mood has moved in a conservative direction in every state... 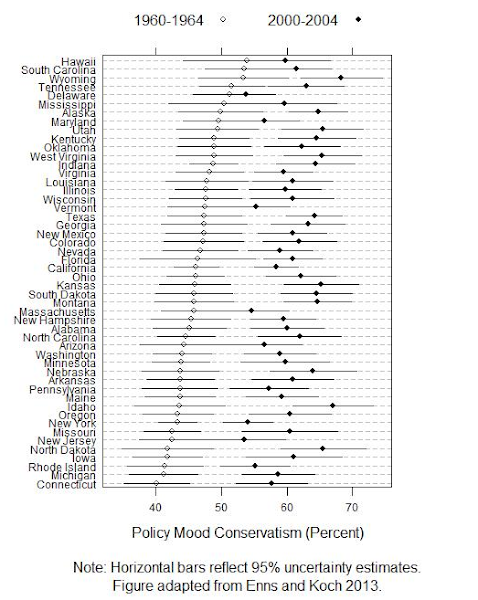 ...Surprised by this uniform shift across states, we examined two questions about government that the American National Election Study asked in the early 1960s and 2000s. Because we were dealing with much smaller sample sizes, we analyzed regions instead of states. Again, the data suggest that all regions of the country have shifted in a conservative direction.

The first question, reported in the left panel of the figure below, asked whether the government in Washington should see to it that every person has a job and a good standard of living or whether the government should let each person get ahead on their own. The fact that the solid dots (2002) are to the right of the hollow dots (1964) supports the view that all regions of the country became more conservative. Interestingly, in 1964, the South appears to have been the most supportive of the liberal response (the government should ensure a job and a good standard of living). The second question, reported in the right panel, asked whether or not the government in Washington was getting too powerful. Across all regions, we again see opinion has shifted to the right. 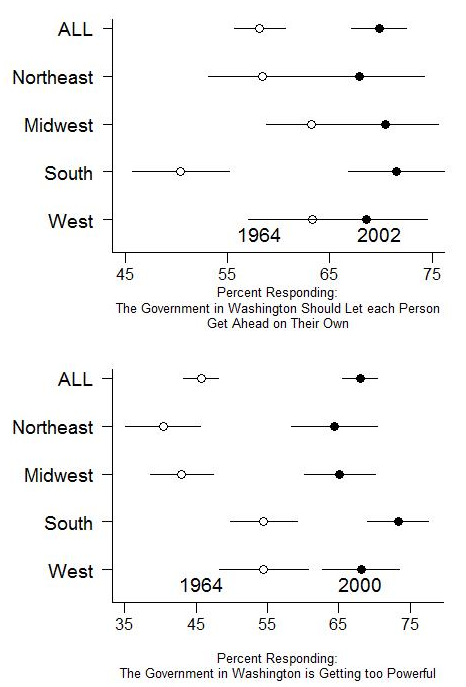 Importantly, the public has not moved in a conservative direction in all issue areas. For example, support for same-sex marriage has been increasing across all states. It is also worth noting that our findings on the 1960s and 2000s hides important shifts in policy mood between these periods, such as increased policy liberalism during the 1980s. However, when it comes to support of government programs, the net conservative shift is clear...

Now these same geniuses -- John Boehner, Eric Cantor, Kevin McCarthy, Jeb Bush, Chris Christie, and Rove among them -- insist that only by pandering to different ethnic groups can the GOP succeed. Their latest push is a hugely unpopular Amnesty bill.

They are either ignorant or lying.

According to Pew Research (PDF), the percentage of Hispanics voting Republican in presidential elections has always traded in a very narrow range. 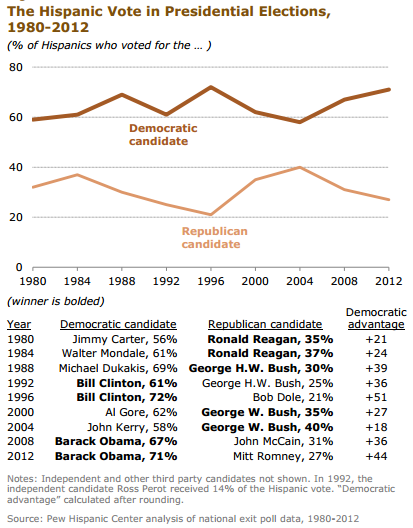 Instead of pandering to different segments of the American population, why don't we nominate a confident, articulate candidate with truly conservative values?

Wouldn't people of all races, religions and ethnicities find the principles of liberty, private property, and economic opportunity incredibly attractive? Yes, of course they would: blacks, Hispanics, whites, Asians, you name the segment, every open-minded American would gravitate to an eloquent candidate with conservative, free-market principles in his or her blood.

Instead of nominating conservatives, Rove and his claque of losers keep pushing "moderates". Unfortunately, GOP "centrists" aren't differentiated enough from the progressive Democrats to energize conservatives and the Reagan Democrats.

Now Rove is pushing a new set of moderates like Chris Christie and Jeb Bush, both of whom appear to support Amnesty.

In 2012, Rove's American Crossroads fundraising operation won less than two (2) percent of the races it invested in.

Why would we listen to losers like these? I, for one, reject their pablum unconditionally.

By the way; Pew IS DEMOCRAT.