The U.S. economy is now so addicted to the Fed’s monthly $85 billion injection of monetary stimulus … that just the thought of withdrawal is enough to cause violent market convulsions. 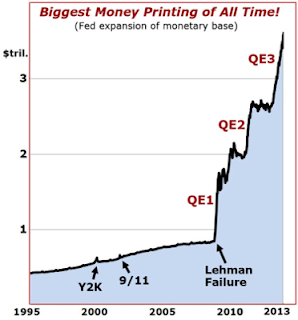 Consider, for example, the absurdity of this recent chain of events:

* They dump their investments by the truckload, and …

All in response to supposedly good news about the economy!

All because investors would rather see the economy sink than see the Fed cut back on its monthly megadose of money shot up their veins.

First, he said they had no choice because of the great debt crisis of 2008.

“Unless we flood the banking system with money,” went the argument, “megabanks will fail and global financial markets will collapse in a heap of rubble.”

Second, as soon as the worst of the debt crisis was apparently behind us, they promptly came up with a brand new rationale: Trillion-dollar federal budget deficits year after year.

“Unless we buy Treasuries by the truckload,” they reasoned, “the deficits will smash the bond markets and sabotage the economic recovery.”

Next in the long line-up of excuses came the European debt crisis, the Fiscal Cliff and, most recently, the government shutdown.

Each time, the Fed kept the pedal to the metal on its giant money presses. And each time, there was a new crisis to justify their reckless DUI.

In her testimony before Congress this week, she says little or nothing about the 2008 debt crisis, federal deficits, European debacles, fiscal cliffs or any others which were among her predecessor’s favorite excuses for the unprecedented money printing she vows to pursue.

Nor does she talk much about a weak economy.

Instead, her new rationale is that, although the economy has improved, it hasn’t quite improved “enough.”

As Mike Larson eloquently notes, it seems the “not-improved-enough” argument is all that’s needed to justify continue running the Fed’s printing presses — and doing so at the same speed as Bernanke did in the immediate aftermath of the Lehman Brothers collapse.

The end result is vividly illustrated in the above chart

It tracks the U.S. monetary base, a direct measure of how much money the Fed has been printing — and injecting into the banking system.

It depicts how the sheer magnitude of the Fed’s monstrous expansion is mind-boggling in the extreme.

To better comprehend this monster, start by looking at the relatively gradual slope of growth in the 1990s and 2000s — before the Lehman Brothers failure. And bear in mind that even that “slower” pace was considered irresponsibly rapid by many experts.

Next, look at the sudden explosion that began immediately after the Lehman Brothers failure! That’s when the Fed threw all its old rule books into the East River. And that’s when the Fed flew off on a new, high-risk trajectory into the outer space of monetary policy.

Then, see how the Fed’s immediate response to post-Lehman crisis (QE1) was replicated not just once, but twice — with QE2 and QE3.

Fact #1. Immediately prior to the Lehman Brothers failure, the Fed reports that the monetary base stood at $849.8 billion.

Fact #2. This $2.7 trillion expansion has all taken place within just six years and one month.

If, instead, the Fed had continued to expand the monetary base at a normal pace (by the same amount as it had since 1961), it would have taken nearly 150 years to come this far. In other words …

With normal growth, the Fed’s recent $2.7 trillion monetary expansion would not have been achieved until the year 2158!

Fact #3. Prior to 2008, there were only two times the Fed embarked on extremely rapid monetary explosion of this type — first in anticipation of the widely feared Y2K bug; and later, in the aftermath of the 9-11 terrorist attacks. But as of the latest tally, the post-Lehman QEs have been

The most alarming fact of all is this …

While the Fed has used crisis after crisis to justify its monetary madness, it has not yet begun to resolve the underlying diseases that gave rise to those crises. It has merely papered over their symptoms.